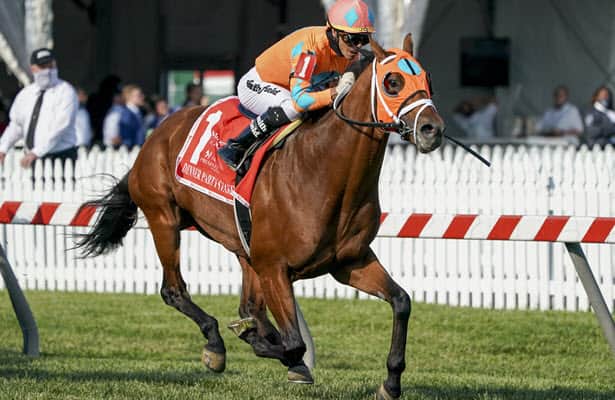 The 120th running of the 1 1/16-mile Dinner Party for 3-year-olds and up on the grass was the eighth of 10 stakes, six graded, worth $2.25 million in purses on a 14-race program headlined by the 146th Preakness Stakes (G1), Middle Jewel of the Triple Crown.

Pimlico’s oldest stakes race and the eighth-oldest in the country, the Dinner Party was contested at two miles for its 1870 debut, won by the Hall of Famer Preakness. The distance has changed eight times over its history, settling at the current 1 1/16 miles in 2014.

“I did like most of our horses," Maker said. "We had a couple of others that ran up the track.”

Jockey Jose Ortiz was aboard for his third win on the day. He let Somelikeithotbrown settle in second as 25-1 long shot Flying Scotsman was left alone to go a quarter-mile in 23.78 seconds and a half in 47.33 before Somelikeithotbrown began to turn up the pressure midway around the far turn.

Flying Scotsman clung to a short lead after going six furlongs in 1:10.52 but Ortiz and Somelikeithotbrown quickly assumed command and gained enough separation to hold off a furious run from several challengers and win by a length. Talk Or Listen edged Midnight Tea Time by a head for second, while 6-5 favorite Sacred Life and 2020 Saranac (G3) winner Bye Bye Melvin dead-heated for fourth, another half-length back.

"He showed me some speed early on, and I got him to relax on the first turn and that was the key," Ortiz said. "He relaxed nicely and from the half-mile pole to the 3/8ths pole I was just waiting and waiting and when I asked him to go he did.”

Somelikeithotbrown won for the seventh time in 19 career starts and pushed his bankroll to $842,838. He previously won the 2020 Bernard Baruch (G2) on turf at Saratoga and the 2019 Jeff Ruby (G2) over Turfway Park’s all-weather surface, and was second by 2 ¾ lengths to Factor This in last year’s Dinner Party.