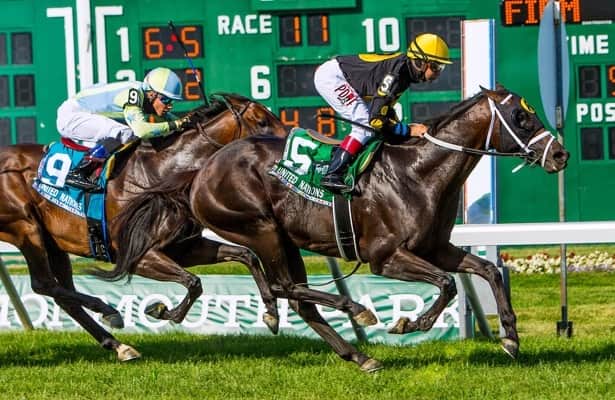 It’s all about threes when trainer Mike Maker sends out the trio of Aquaphobia, Temple and Tide of the Sea in search of a third consecutive victory in Saturday’s Grade 2, $200,000 Mac Diarmida at Gulfstream Park.

Honoring the Florida-bred multiple Grade 1 winner and 1978 Eclipse Award honoree as champion grass horse, the Mac Diarmida debuted in 1995 and was first graded in 1997. It is the richest of six turf stakes on the Fountain of Youth undercard, which also includes multiple Grade 1 winner Got Stormy’s 6-year-old debut in the $125,000 Honey Fox (G3).

“We’ve been very fortunate,” Maker’s assistant Nolan Ramsey said. “We’ve got some great clients and we’ve had a bit of luck, so we hope we can continue on through the rest of the meet.”

Maker had 11 of the 29 nominations for the Mac Diarmida, whose two-time defending champion, an ex-claimer-turned-millionaire and winner of the $1 million Pegasus World Cup Turf Invitational (G1) in 2020, continues his recovery from a minor injury that forced him to miss the Breeders’ Cup Turf (G1) last fall.

This will be the seventh consecutive race facing graded company for Aquaphobia, an 8-year-old son of Giant’s Causeway that exits an eighth-place finish in the Jan. 23 Pegasus Turf, beaten four lengths by Colonel Liam, whose connections opted to skip the Mac Diarmida.

“He’s an old, class horse. Nothing really throws him off. He came out of the race great and has been training great since,” Ramsey said. “I thought he ran a great race. We gave him a little time after the winter, freshened him up and brought him into the Pegasus. He ran great, just had some traffic troubles down the lane. We thought it was a valiant effort so no complaints there. He’s training well. We’re looking forward to running him.”

Jose Ortiz has the assignment on Aquaphobia from Post 7 in a field of eight.

Three Diamonds Farm’s Tide of the Sea and Paradise Farm Corp.’s Temple respectively ran 1-2 in the 1 1/2-mile W. L. McKnight (G3) on the Pegasus Turf undercard, separated by less than a length. It was the second straight graded attempt and first win for 5-year-old Tide of the Sea, by turf champion English Channel.

“It was a little bit of a head bob but both horses ran a great race,” Ramsey said. “They both came out of the race well and both are training great, as well, so no complaints across the board.”

Tide of the Sea has won three of his last four races, all in front-running fashion. The exception came in the Dec. 12 Fort Lauderdale (G2) at Gulfstream when he was rank and forced to check early, raced last of 10 for six furlongs and rallied to be sixth, beaten 4 1/2 lengths, by Pegasus Turf runner-up Largent.

Temple, a 5-year-old Temple City gelding, has run second three straight times — all by less than a length — including a half-length loss when dead-heating with multiple stakes-winning stablemate Muggsamatic in the 1 1/16-mile Claiming Crown Emerald Dec. 3. Temple won the 2019 Gio Ponti at Aqueduct.

Tide of the Sea “can run all day,” Ramsey said. “It’s race to race, but Tide of the Sea tends to be more toward the front end and Temple likes to rate and come from behind, so their running styles kind of complement each other.

Temple “is always right there, just never seems to be able to punch the ticket,” he added. “Last time was the first time we stretched him out since the first time we ran him at Kentucky Downs going a mile and 5/16. He really seemed to relish the distance, so I think a mile and three-eighths will be right up his alley.”

Tyler Gaffalione has the call on Tide of the Sea from Post 3 at topweight of 124 pounds, while Irad Ortiz Jr. rides Temple from Post 1.

Amerman Racing’s 6-year-old homebred Admission Office forged a short lead in last year’s Mac Diarmida but was outrun to the wire and came up a length short of Zulu Alpha — his fifth graded-stakes placing including the 2019 Fort Lauderdale, when he also ran second. The son of 2013 Gulfstream Park Turf Handicap (G1) winner Point of Entry became a graded winner in the 1 1/2-mile Louisville (G3) last June in his 2020 finale.

Admission Office returned to action Jan. 9 at Gulfstream in the one-mile Tropical Turf, finishing seventh, but rebounded with a late-running third in the Tampa Bay (G3) Feb. 6, beaten a length. Julien Leparoux rides back from outside Post 8.

Trainer Brian Lynch also entered Susan and Jim Hill’s Phantom Currency, front-running winner of a 1 1/8-mile allowance Jan. 13 at Gulfstream. It was his first start since a failed return to dirt in the Clark (G1) last November. He will break from Post 6 with jockey Paco Lopez up.

Summer Wind Equine’s homebred Moon Over Miami returns from nearly five months between starts for Hall of Fame trainer Bill Mott. The 4-year-old Malibu Moon colt has failed to hit the board in either of his previous two races at Gulfstream, one on dirt, but was a half-length winner of the 1 5/16-mile Dueling Grounds Derby last September at Kentucky Downs. He hasn’t been out since running sixth in the 1 1/4-mile Belmont Derby (G1), and will have Junior Alvarado in the irons from Post 4.

Stronach Stables’ homebred Sir Sahib, based in Canada the past two years, made his return to the U.S. in the McKnight, getting steadied early on and never racing in contention, finishing 10th. In his previous two starts, the 6-year-old gelded son of 2012 Breeders’ Cup Classic (G1) winner Fort Larned ran second in both the 1 1/2-mile Northern Dancer (G1) and 1 1/4-mile Singspiel (G3) last fall at Woodbine. Hall of Famer Edgar Prado gets the assignment from Post 5.