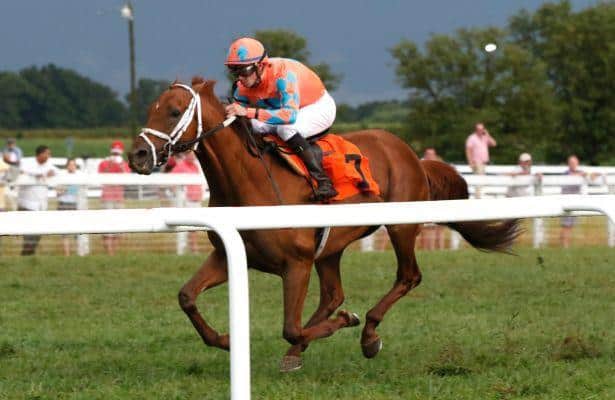 Mike Maker wouldn’t mind having a shedrow full of racehorses that were pricey yearling purchases. But while the Kentucky-based trainer does buy young horses at the sales, much of his clientele is more likely to spend $50,000 to claim a horse than to buy a baby.

Both of Maker’s starters in Saturday’s Breeders’ Cup at Santa Anita Park were acquired via the claim box: Da Big Hoss in the $4 million Turf and Al’s Gal in the $2 million Filly & Mare Turf. Another one-time claim, Oscar Nominated, was to run in the $200,000 Twilight Derby that wraps up Friday’s Breeders’ Cup card.

“Mike is great at this, great at what he does,” said David Koenig of Union, Ky., part of the Skychai Racing partnership headed by Louisvillians Dr. Harvey Diamond and Jim Shircliff that claimed Da Big Hoss at Churchill Downs for $50,000 1 1/2 years ago.

Da Big Hoss comes into the Breeders’ Cup off his second victory in Kentucky Downs’ $600,000, Grade 3 Calumet Farm Kentucky Turf Cup, one of Maker’s five stakes victories (all with one-time claimers) that led to his second straight training title at the all-grass track on the Tennessee border.

The 5-year-old horse has won eight of 11 starts for Skychai, including seven stakes, and has earned just shy of $1 million this year alone. Da Big Hoss was sixth in last year’s Breeders’ Turf after being more than 30 lengths back early on, closing with a rush at 60-1 odds but no threat to the powerful kick of the Irish filly Found, who is back to defend her title.

“This is awesome, unbelievable,” Koenig said at Santa Anita. “Something that doesn’t happen very often, for sure. It’s been a ride.”

Ramsey claimed Al’s Gal at Gulfstream Park in February, 2016, because he thought her pedigree worked well with his standout stallion Kitten’s Joy. She’s won five races, capped by the Kentucky Downs’ Ladies Marathon and Grade 1 E.P. Taylor in her last two starts. She also has six seconds in her 15 starts since the claim.

But because he has more than 700 horses and Kitten’s Joy is filled up with mares for the 2017 breeding season, Al’s Gal is being offered at next week’s Fasig-Tipton breeding stock sale in Lexington — which is how she came to run in Woodbine’s E.P. Taylor. Ramsey said he didn’t really want to sell her but that Fasig-Tipton president Boyd Browning told him, “I think she’ll bring between $450,000 and $500,000.”

“‘What happens if she wins a Grade 1?’” Ramsey said he responded. “‘Then the sky’s the limit.’ Of course he chuckled like, ‘yeah, yeah.’ Anyway we sent her to Woodbine.”

Al’s Gal squeaked out a nose victory at Woodbine to get that Grade 1. There was no initial plan to go to the Breeders’ Cup 21 days later, but Maker said, “She was going to the sale, she was doing well so we figured we’d take a shot here. She’s a big-time overachiever. She’s not flashy by any means. She’s easy to train, a very sound horse — kind of like Da Big Hoss but in a smaller package.”

Ramsey noted that “the last time we took at $35,000 claimer out there we won the Breeders’ Cup Dirt Mile with Furthest Land.” That 2009 victory at Santa Anita was the first in racing’s championship event for Ramsey or Maker. Ramsey now has four, while Maker also won the 2011 Juvenile with homebred champion Hansen for Northern Kentucky doctor Kendall Hansen and Skychai.

“I think it’s eight or nine that we’ve claimed with Mike that turned out to be graded stakes-winners,” said Ramsey, Kentucky’s all-time winningest owner racing in partnership with wife Sarah. “So it’s no fluke. Get a good sound horse, put her in the right spot, get the right jockey on her and Mike is very lethal.”

Maker went on an unprecedented run in September. He not only won five of 12 stakes at Kentucky Downs, he bagged two more at Oklahoma City’s Remington Park on Sept. 25 with former claimers, giving him seven stakes (all on grass) with seven former claimers in three weeks.

Asked if he wonders what it would be like to buy dozens of yearlings a year, Maker said with a laugh, “It would be nice. I wonder about it every day. But I like all of them: the 2-year-old sales, yearling sales, claiming.”

He’s certainly not complaining as he seeks his biggest victories ever with a former claimer. Da Big Hoss, with Kentucky Downs champion jockey Florent Geroux up, is 20-1, while Al's Gal is 15-1 under Jose Ortiz.

“Both races are very deep and very competitive,” Maker said. “Da Big Hoss’ race, if 10 of them won it, it wouldn’t be any surprise to me at all. I feel the same thing with Al’s Gal.”

“Yes, definitely,” he said, adding, “It would be life-changing. His value would go up and the purse is not too shabby, either. But he doesn’t owe us anything. He’s paid his way.”