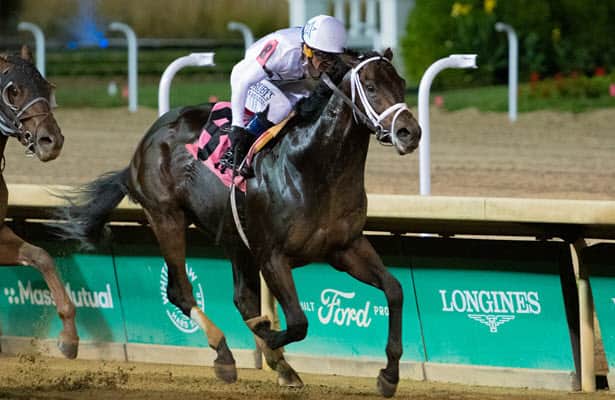 He was the very model of a thrilling Major General.

Make no mistake. He’s animal and certainly not vegetable.

His daddy Constitution can quote the speed historical.

He won the Iroquois Stakes, Grade 3, in order categorical.

With the name Major General, shameless theft from Gilbert and Sullivan was inevitable. His burgeoning talent provided the perfect excuse for that literary robbery by preventing a long-shot heist Saturday night at Churchill Downs.

The victory against nine other 2-year-olds also gave the $420,000 colt owned by WinStar Farm and Siena Farm an automatic berth in the Breeders’ Cup Juvenile on Nov. 5 at Del Mar.

“He’s a good, young horse who’s still developing,” Castellano said. “When he passed the other horses, he ended up a little bit in front, and he kind of looked around.”

After making up 4 1/2 lengths traveling wide on the backstretch and going from fifth to second, Major General found the lead turning for home in tandem with the favorite and impressive Saratoga maiden winner Stellar Tap (1-1).

It was just before the quarter pole where Stellar Tap’s jockey Ricardo Santana Jr., taking the rail path, felt like he was fouled from his right by Major General. That led to an objection and a brief telephone conversation with stewards, who did not change the order of finish.

Trainer Steve Asmussen’s best chance for a record-tying fourth Iroquois victory thus ended with a fifth-place result in the field of 10.

“I was really surprised Santana claimed foul,” Castellano said. “His horse was done by the three-sixteenths pole. You could see in the head-on that he put his face out toward my horse. I don’t think I bothered him at all.”

As Stellar Tap faded at the eighth pole, Major General and Indiana Grand allowance winner Tough to Tame were left to fight to the finish.

With Sophie Doyle riding, Tough to Tame made it close, placing second for trainer Chris Davis.

“He ran a great race closing late on the outside,” Davis said. “I thought being on the rail hurt him in the early portion of the race. I’d love to see him draw to the outside next time and see what happens. We’re very proud of how he ran tonight.”

The experience might have taught Major General a lesson in his first time going two turns.

“When he felt a dueling horse, he went outside to rebreak again,” Castellano said. “I like those kinds of horses.”

While Major General fended off Tough to Tame, Ellis Park maiden-breaker Red Knobs (29-1) made a late charge to finish third in Dale Romans’s quest for an Iroquois three-peat. Bourton Heist (10-1) was another half-length back in fourth, dropping to 0-for-4.

The victory was the first in the race for both Castellano and trainer Todd Pletcher, who was back at his home base in New York.

“Todd told me break out of the gate good and get a good position,” said Castellano, who said that was about all he needed to hear from his fellow Hall of Famer. “When he gives the call to ride, he believes in the jockey, and he gives a lot of confidence to perform in the race.”

Major General ran his record to 2-for-2 with both victories being by a neck. Rather than coming from behind, he led from gate to wire winning his debut Aug. 21 in a $100,000 maiden sprint at Saratoga.

Now it will be up to analysts to decide just how good Major General’s performance was as he tries to become the first horse to pull off the Iroquois-Breeders’ Cup double. Or even the Iroquois-Kentucky Derby double.

Soon we’ll be acquainted, too, with matters mathematical.

Even if we’re baffled by Beyer and Bris quadraticals.