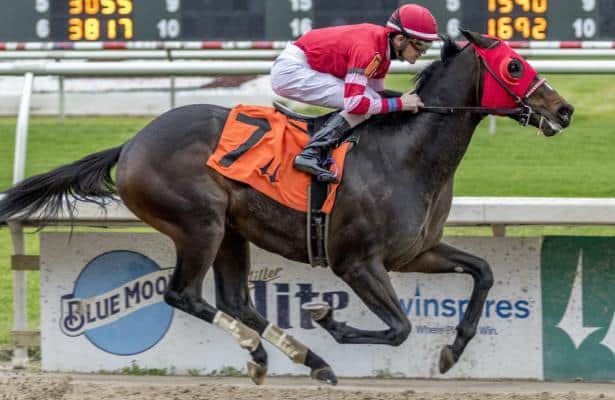 When Major Fed last started at Churchill Downs, it was in June, when the 2020 Kentucky Derby runner won an allowance race. On Friday, the 4-year-old Ghostzapper colt returns for another allowance.

The colt will be making only his second appearance of the season after minor injuries held him up at various times. Now fully recovered and after a four-furlong drill Friday, trainer Greg Foley said he was ready to go in Friday’s $134,000, 1 1/16-mile race.

Major Fed won last time out with a furious closing kick from the outside. Before the stretch run, the colt had been bottled in, making things too close for Foley’s comfort.

“He hit a gear there at the eighth pole,” Foley said. “He won by three-quarters of a length or a length, but he was in hand there at the end of the race. He ran a pretty impressive race, really. He was supposed to win, and we thought he would win. He was in enough trouble that he had to be the best horse to win, and he did.”

For Friday’s race, Foley said, he would expect a similar type of trip from the colt, though he wants to see smoother sailing in the early going.

Florent Geroux will have the mount Friday as Major Fed is set to begin from post position 5 in the nine-horse field.

The race includes 3-year-old Super Saver colt Starrinmydreams, who gets class relief in this race after running in stakes for most of the year. His best finish came from a third-place effort in the Lexington (G3) in April at Keeneland.

The race Friday is part of Foley’s plan to get the colt back into consistent racing, eventually having him run in stakes company again. In 2020 he ran largely in Derby points races, finishing second in the 2020 Risen Star (G2) at Fair Grounds before eventually coming in 10th in the Kentucky Derby.

Foley said he does not have any particular race in mind for Major Fed after Friday.

“He’s a really nice horse, and he has been from the get-go,” Foley said. “He’s always been a little bit of a hard-luck case. Never any bad injuries or anything like that, just knick-knack stuff that we just had to take time with. Hopefully we’re all over that and can go on with it.”

Major Fed’s race is carded as race 8 at Churchill Downs on Friday. Post time is set for 4:22 p.m. EDT.