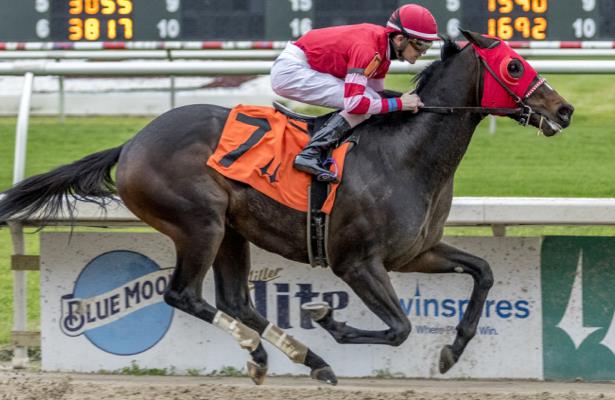 Major Fed is not a horse that has gate issues. But in his last two races he sure had issues at the gate.

“He’s not a bad horse in the gate,” his trainer Greg Foley said. “He’s just been kind of unlucky in the last two races.”

It actually is a distinction with a difference. He was caught looking the wrong way when the gates flew open at the Louisiana Derby. He was a step or two slow coming out of the outside stall in the Matt Winn.

Whatever those circumstances might be labeled, Major Fed went from a Risen Star runner-up to an out-of-the-money horse in his springtime starts.

Now, instead of being assured of a place in the Kentucky Derby, he is still a maiden winner trying to get in. On Wednesday he could be a first-time favorite when he races against nine other 3-year-olds in the $300,000 Indiana Derby (G3) at Indiana Grand.

“This looks like it’s an awful good spot,” Foley said by phone from his Louisville home Sunday afternoon. “We were thinking one or the other between this and the Blue Grass. This race looked too good to pass up.”

In the Kentucky Derby qualifying standings, Major Fed has 30 points, putting him in 17th place. If he were to win Wednesday he would move to 50 points, and he would jump at least temporarily into 11th with seven preps still to be run by Aug. 15.

“There are a lot more points for the Blue Grass,” Foley said. “I don’t think it will take 50 to get in the Derby. I think with another five or 10 points we could be in it. But if we don’t run big in this spot, there’s probably going to be no need wondering about the Kentucky Derby.”

Owned by Rob Lloyd and his partners doing business as Lloyd Madison IV (Lloyd is from Madison, Wisc., and he is one of four partners), the Ghostzapper colt was given morning-line odds of 7-2, second to Dallas Stewart-trained allowance winner Winning Impression (3-1).

But in early betting both off shore and in Europe, Major Fed is the 5-2 favorite.

“I think he’s the horse to beat,” Foley said. “I want to just get him a good break, set somewhere in the middle of the pack and in the clear when he comes out of the turn. Then let him rock and roll down the lane.”

With better starts at the Fair Grounds during the winter Major Fed drew the attention of Derby followers with his maiden-breaking 81/2-furlong victory. Despite being forced as much as six wide he won by four lengths.

He overcame another wide trip to finish second to Modernist in the second division of the Risen Star.

Then Major Fed was hooked up with jockey Joel Rosario – and with bad luck both at the draw and at the gate.

“In the Louisiana Derby he got left,” Foley said. “He was in the ‘1’ hole that day. When they rang the bell he had his head turned. He was five lengths behind the next-to-last horse right out of the gate. He pretty much lost the race right there. Any kind of decent break I think he could have won the Louisiana Derby.”

Instead he made a late charge to finish fourth and salvage 10 qualifying points. But if not for the pandemic his Derby campaign might have been over.

The remapped road to Labor Day weekend at Kentucky actually took Major Fed to Churchill Downs for the May 23 Matt Winn. Drawn into the outside gate, he was at a disadvantage again before the 10 horses hit their collective stride.

“The ground broke out from under him the first jump out of the gate,” Foley said. “Then it was a horrendous trip. That horse has never run a race like that. I’ve just got to mark it off, that’s all.”

After working Major Fed last week, James Graham will be the fourth jockey in his six starts. But no matter who was going to get the ride, Foley has been confident that the race would not be lost again at the break.

“He’s not a bad gate horse,” he said. “He’s not in there raring up or throwing a fit or anything like that. He was standing absolutely perfect (in the last two races). It’s not like he’s in there screwing up to get himself left.”

Early betting suggests that the Indiana Derby may come down to Major Fed and Winning Impression (7-2 off shore), trainer Dallas Stewart’s fourth-place finisher May 2 in the Arkansas Derby.

“Obviously he hasn’t run since,” Winning Impression’s jockey Julien Leparoux told Indiana Grand media relations. “But he ran a big race over there. He’s got a big chance.”

While trainer Steve Asmussen’s pace-stalking Earner (8-1 morning line, 4-1 off shore) drew favorably into gate 4 and Winning Impression less so into the 9, Major Fed will start from post 8.

“It’s fine,” Foley said. “There’s a couple little speeds (long shots Juggernaut and Necker Island) in there. The racetrack can play favorable to speed at times. So we just don’t want to get way back out of the race. I’ll just tell James to keep him where he can see them. Then we’ll go from there.”

Foley said he would consider the Ellis Park Derby on Aug. 9 if he does not train Major Fed right up to the Kentucky Derby. But that all depends on what happens this week.

The Indiana Derby is posted for Wednesday at 7:45 p.m. ET.