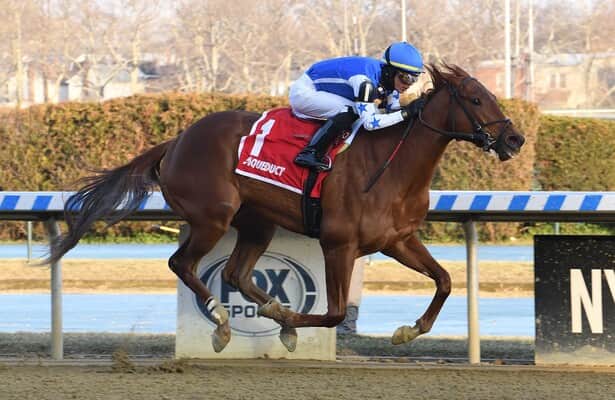 J.W. Singer’s Magic Circle got her breakthrough victory in her fourth attempt at stakes level with a commanding, gate-to-wire performance in Sunday’s $100,000 Busanda Stakes for 3-year-old fillies going 1 1/8 miles at Aqueduct.

The chestnut daughter of Kantharos was a close third in the Demoiselle (G2) in December at the Big A, displaying the same forward-placed tactics before lugging out in deep stretch. Magic Circle never relinquished this time around, maintaining her advantage throughout to win by 2 3/4 lengths.

WHOA. Magic Circle earns 10 points to the Kentucky Oaks with @jose93_ortiz in the Busanda for @RudyRodriguezNY! #TheBigA pic.twitter.com/qdLCI6Sh4t

In capturing the Busanda, Magic Circle earned 10 qualifying points towards the May 6 running of the Kentucky Oaks, pushing her total to 13 points. She earned two points when third in the Demoiselle and one point when fourth in the Frizette (G1) in October at Belmont Park.

Piloted by Jose Ortiz, now a three-time Busanda winner, Magic Circle was nudged a few strides out of the gate from her inside post and led the field through an easy opening quarter-mile in 24.38 seconds over the fast main track. Rosebug kept close company to her outside in second with two-time winner Waters of Merom another half-length back in third.

Positions remained unchanged through a half-mile in 48.28 seconds, but the tempo picked up around the far turn with Morning Matcha launching her usual late move.

Ortiz kept Magic Circle to task approaching the quarter pole and into upper stretch as Morning Matcha continued to sweep up ground. But Magic Circle could not be caught, coming under the wire in a final time of 1:51.29.

“She broke really sharp and put me there by herself,” said Ortiz, who also piloted Fierce Boots (2014) and Flora Dora (2016) to Busanda scores. “She was traveling very nicely the first quarter. She was pulling me a little too much. I was a little bit nervous, and I just wanted to put my hands down and relax, and she finally did passing the seven furlongs. When she entered the backside she was completely relaxed and going a very decent cruising speed. She didn’t walk the dog but the track is fast and inside is good, so I wasn’t afraid to let her go.”

Trainer Rudy Rodriguez tasked Ortiz with piloting Magic Circle, who was ridden by Manny Franco in all four of her previous efforts.

“At Belmont, when she finished second, I was hoping that Manny didn’t (use the crop) the way he did, because she doesn’t like it too much,” Rodriguez said. “I told him, ‘Don’t try to surprise her, because she ducks in and out.’ Jose is one of the top riders in the country, and we are happy to get him in the race. Nothing against Manny; I told the owner that if we couldn’t get Jose, we would try to get Manny.”

“I’m going to talk to the owner about that and decide what we are going to do,” Rodriguez said. “I don’t know. You never know. Right now she’s learning, so we just have to hope for the best.”

Trainer Butch Reid did not rule out the addition of blinkers for Morning Matcha’s next start.

“We'll try it in the mornings with her and see if it perks up her interest early on a little bit and go from there,” Reid said. He added that Morning Matcha will likely target the Gazelle.

“That's a definite possibility because it’s not easy finding races long enough for this filly and the Gazelle is a mile and an eighth,” Reid said.

Completing the field were Rosebug, Waters of Merom and Gamestonks.

Magic Circle, bred in Kentucky by Manitou Farm, is out of the Distorted Humor mare Magic Humor. She was purchased for $110,000 from the 2021 OBS April Sale, where she was consigned by Costanza Stables.