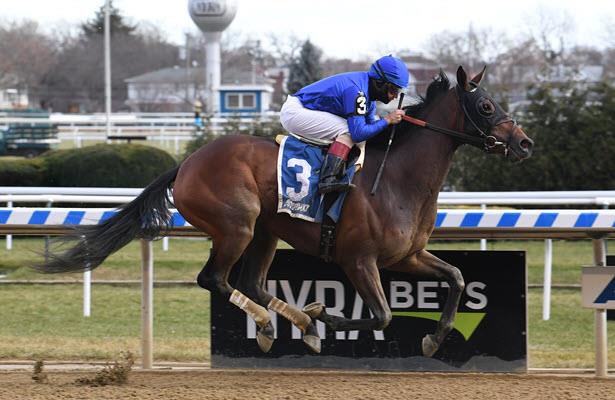 The Belmont Oaks Invitational is the first of seven Grade 1 events during the 27-day Belmont Park fall meet, which kicks off on Friday and runs through Sunday, Nov. 1.

In addition to 22 graded stakes, the lucrative meet also will include seven Breeders' Cup "Win and You're In" qualifiers to the two-day Breeders' Cup 2020 World Championships to be held Nov. 6-7 at Keeneland Race Course.

By Galileo and out of the Group 1-winner Margot Did, Magic Attitude was bred in Great Britain by Katsumi Yoshida and is a full-sister to 2018 Prix de Sandringham (G2) winner Mission Impassible, who is also multiple Grade/Group 1-placed.

Magic Attitude presents an impressive ledger that includes a victory in the Prix Vanteaux (G3) in May when racing off a nearly eight-month layoff for former conditioner Fabrice Chappet.

She followed in June with a second in the 10-furlong Prix Saint Alary (G1) at Chantilly in a race won by the undefeated Tawkeel, who exited that effort to win the Group 2 Prix de la Nonette at Deauville.

Last out, in the Group 1 Prix de Diane at Chantilly, Magic Attitude finished a strong fifth, defeated 3 lengths to Fancy Blue, in a loaded edition of the 1 5/16-mile test known as the French Oaks.

New trainer Arnaud Delacour said Magic Attitude has matched strides with some of the top sophomore fillies in Europe in her brief career.

"She's right there with them. When she ran in the Prix de Diane all the form was very solid," said Delacour. "It was a very good edition of the French Oaks this year and the fillies that finished in front and around her have come back and won graded stakes, so the form is excellent."

Fancy Blue, victorious in the Prix de Diane, came back to win the Nassau (G1) at Goodwood ahead of a third in the Matron (G1) at Leopardstown. The fourth (Raabihah) and sixth-placed (Ebaiyra) finishers exited the Prix de Diane to win a Group 3 and Group 2, respectively.

Magic Attitude was transferred to the care of Delacour in the summer where she has trained at Fair Hill Training Center in Maryland.

"She arrived here in late July. We liked her right away," said Delacour. "She's not very big, but she's very athletic. She moves very well on the grass."

The talented bay has breezed four times at Fair Hill, including a half-mile work in 50 flat on Sept. 11 over the dirt.

"She's training very well," said Delacour. "We've gotten to know her a little bit. It looks like she needs to be covered up, so we put her behind a pacesetter to let her relax and then gallop out strong."

While Magic Attitude demonstrated ability to run well off the layoff in her Group 3 score, Delacour said Saturday's test, to be contested off a two-month layoff, will be a different experience.

"That win was coming off the winter with a trainer that knew her," started Delacour, regarding the Prix Vanteaux. "When she came to us she was ready to run. We just had to maintain her, so I don't think that the time off should be a problem."

The French-bred daughter of Anodin graduated in November on the synthetic surface at Marseille-PV when traveling 10 furlongs and followed in December with an allowance score at the same track and surface.

In June, when making just her second start on turf, Neige Blanche captured the 11-furlong Prix Cleopatre (G3) over soft going at Lyon-Parilly. She was subsequently transferred to the care of Powell in California, where she ran a closing fourth last out on debut in the Del Mar Oaks (G1) on Aug. 22 over 9 furlongs of firm turf.

Powell said he hopes the added distance on Saturday will benefit.

"It was her first race stateside and although the pace wasn't very strong, she was a little outpaced the first part of the race but it was still a promising debut and she finished very well," said Powell. "I'm hoping the mile and a quarter on the big track at Belmont Park will be to her liking. Hopefully, she will not be too far back as it's going to be a small field."

Godolphin's versatile Hard Spun bay Antoinette will remain on turf after capturing the 1 3/16-mile Saratoga Oaks last out on Aug. 16 over firm footing.

Trained by Hall of Famer Bill Mott, Antoinette captured the off-the-turf Tepin in December at the Big A ahead of third-place efforts on the dirt in the Fair Grounds Oaks (G2) in March and the Gardenia in May at Oaklawn Park.

Following a third in the Wonder Again (G3) in June on the Belmont turf, Antoinette returned to dirt and finished a good third in the Coaching Club American Oaks (G1) on July 18 preceding her Saratoga Oaks effort.

Hall of Famer John Velazquez retains the mount from post 5 as Antoinette looks to improve on a record of 8: 3-0-4, with purse earnings of $483,750.

Rounding out the field are Arindel's Key Biscayne (post 3, Manny Franco), who was third last out in the Saratoga Oaks for trainer Juan Alvarado; and Paul Pompa Jr.'s Setting the Mood (post 1, Luis Saez), winner of an off-the-turf maiden in May at Gulfstream Park for trainer Todd Pletcher.

The Belmont Oaks Invitational is slated as Race 5 on Saturday's 10-race program, which offers a first post of 1:00 p.m. ET.