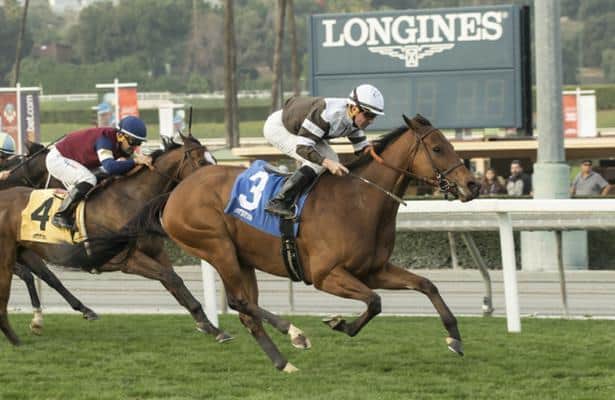 Madame Stripes, beaten a nose by Insta Erma in October’s Swingtime Stakes, turned the tables in Monday’s Grade 3, $100,000 Megahertz Stakes at Santa Anita Park to score a 1 ¼-length victory, despite jumping out of the starting gate.

“[Trainer] Neil [Drysdale] was very, very confident in her being ready for today’s occasion,” said jockey Kent Desormeaux. “He was mostly concerned with how fresh she was going to be. I rode her European-style. I put a little steel in her mouth so she couldn’t jump away from the gate. It worked out well because the rest of the race she was dragging me and she just loomed up to the leaders.

"Once she got trapped at the three eighths pole she just took that deep breath and presented. She just flew home. It was fun.”

Thundering Sky set the pace for the one-mile turf race featuring fillies and mares 4 years old and up. Following her through the opening fractions was Chocolate Coated, with the first quarter and half-mile going in :23.11 and :46.98. The order remained unchanged the first half. Insta Erma fell next in line, with Lady Valeur, Madame Stripes, Do the Dance and Laseen rounding out the field.

“When she jumped (leaving the gate) like that, Kent was able to get her covered up and she relaxed,” said Drysdale. “But when I saw 47 (46.98 for the first half mile), I said ‘Uh oh, uh oh!’ The way it turned out, the favorite moved early and I was glad to see that. I think this mare is stronger this year. She’s getting better.”

Insta Erma held for second over Thundering Sky. Laseen, Chocolate Coated, Lady Valeur and Do the Dance completed the order of finish. Bombilate was scratched.

Owned by Gainesway Stable, Madame Stripes earned her fourth win in 17 starts in the Megahertz. The Argentinian-bred bred first raced in her home country before transferring to Drysdale’s care before the 2016 season. Now 6 years old, Madame Stripes has earned $313,218 on the track. The Megahertz was her first graded stakes win.

“It was a dream situation for our whole team,” said Desormeaux, “which I loved, watching Corey [Nakatani] make that early move on Insta Erma. I’m glad he did that. I was stuck behind Lady Valeur and Bejarano and was not enjoying my trip at all. When Nakatani made that move, you can see that I dove to the inside and got right behind him. I was hoping he could blaze a trail home for me, and he did.”

Prospect Watch: 6 debuting during Preakness week
Looking to pass some time while waiting for Saturd...
x