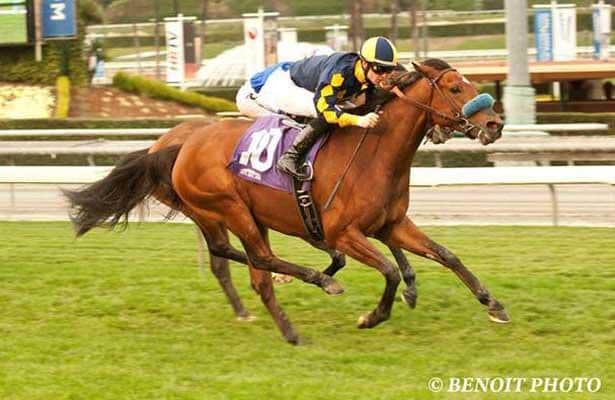 Mid-pack in a field of 10 at the top of the lane, longshot Macaabra, with Flavien Prat up, came rolling in the middle of the racetrack to tag 4-1 second choice Zanbo and Rafael Bejarano by a half length to win Friday’s $58,000 Milky Way Purse allowance for older fillies and mares, getting 6 ½ furlongs down Santa Anita’s hillside turf course in 1:13 flat—resulting in a Pick Six carryover into Saturday of $74,221.

With a special 10-race, Sunshine Millions California Cup program scheduled for Saturday, it is expected the total Pick Six pool will exceed $750,000.

Trained by HRTV’s Gary Mandella, Irish-bred Macaabra made amends for an eighth-place run down the hill on Oct. 24, which, according to Mandella, was caused by an infection.  A solid second in her U.S. debut going a mile on turf at Del Mar Aug. 25, Macaabra made her fourth stateside start today.

“It wasn’t the hill that got her last time,” said Mandella.  “We diagnosed her health issues after the race and found out she was fighting a lung and throat infection.  That’s why she ran less than expected.  With the time off and treatment, that’s why you saw such a big difference today.”

Prat, a native Frenchman who is scheduled to return to his homeland to ride full-time in a couple of months, was aboard the Mandella trainee for the first time today.

“She was relaxed the first part and she finished very strong,” said Prat.

A 4-year-old filly, Macaabra is owned by Henry Nothhaft.  She picked up $34,800 for the win and notched her fourth win in her 11th overall start.

Third behind dueling leaders Madre Luna and Deity crossing the dirt at the top of the stretch, Zanbo, the lone California-bred in the lineup, made the lead while splitting the top two a furlong out but couldn’t hold off the winner late.

Well backed in her U.S. debut as the 4-1 third choice, Diaminda was keen early with Mike Smith and rallied from fifth through the lane to finish third, a half length in front of longshot Deity.

Mesana, the 6-5 favorite with Victor Espinoza, was never a factor and ran seventh.

Saturday’s Pick Six will cover races five through 10.  There is a special early first post time tomorrow of 12 noon, with admission gates opening at 10 a.m.