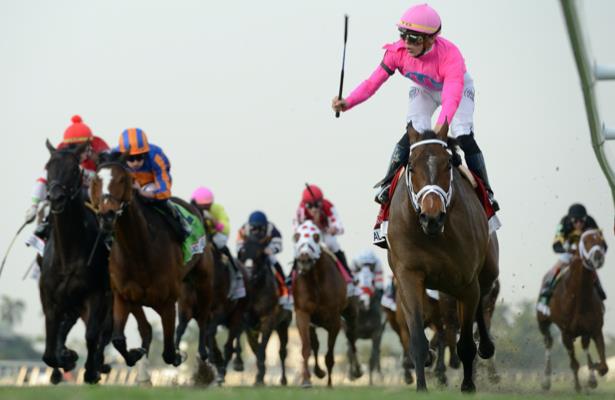 Michael Hui’s Zulu Alpha, a former claimer who won the $1 million Pegasus World Cup Turf (G1) in his most-recent start, returns to the races Saturday when he faces a competitive group of nine other older horses in the Grade 2, $200,000 Mac Diarmida at Gulfstream Park.

Zulu Alpha’s competition will include Grade 1 winners Sadler’s Joy and Channel Maker, among others, going 1 3/8 miles over the turf course.

A 7-year-old son of Street Cry, Zulu Alpha was claimed by in September of 2018 for $80,000. The gelding won the McKnight (G3) and Mac Diarmida (G2) during Gulfstream’s 2018-2019 Championship Meet and was second in the United Nations (G1) and fourth in the Breeders’ Cup Turf last summer and fall.

As the calendar turned to 2020, Maker and Hui had to consider whether to defend their title in the McKnight or take a shot in the Pegasus.

“The way Mike put to me is you can go in the McKnight again for $200,000 and you will be even money or you can take a shot,” Hui said. “He knew when he said that I’m all about taking a shot. Why not?”

Under a beautiful ride by jockey Tyler Gaffalione, Zulu Alpha slipped through along the rail to win the Pegasus.

“It was great doing it for such a great guy,” Maker said. “He’s like a brother to me. It was very special.”

As far as how Zulu Alpha came out of the Pegasus? “Super,” Maker added. “He’s a very big horse, he carries a lot of flesh. He continues to do well and we’re looking forward to another big effort. We’re hoping for a long career.”

While Zula Alpha will be trying to win from off the pace, A Thread of Blue could be a danger on the lead. The Kiaran McLaughlin-trained colt has been on or close to the pace in all his starts.

A gate-to-wire winner of the 1 1/8-mile Saratoga Derby Invitational Stakes and a winner of more than $1 million, A Thread of Blue enters the Mac Diarmida off a fourth-place finish in the mile Tropical Turf (G3) Jan. 11 off a near three-month layoff.

“He’s training very well,” McLaughlin said. “We ran him a mile first time back this year and it was just a little too short and hustling all the way. Hopefully, he loves this track and hopefully he gets to an uncontested lead or close and gets comfortable. He’s better doing that.”

Joe Bravo gets the mount on A Thread of Blue.

Woodslane Farm’s Sadler’s Joy, a winner of more than $2.4 million, enters the Mac Diarmida off a sixth-place finish behind Zulu Alpha in the Pegasus World Cup. The 8-year-old had previously won the Red Smith (G3) at Aqueduct in November. Sadler’s Joy won the Mac Diarmida in 2018 and Sword Dancer (G1) in 2017. Javier Castellano gets the mount for Tom Albertrani.

Channel Maker, trained by Bill Mott, won the Man o’War (G1) last May at Belmont Park. The 6-year-old was second in the Hirsch Turf Classic (G1) in October and finished 12th win the Breeders’ Cup Turf (G1) Nov. 2 at Santa Anita. Junior Alvarado gets the mount.

W.L. McKnight (G3) upsetter Spooky Channel, Morocco, Nessy, Admission Office, Marzo and Armistice Day are others in the Mac Diarmida field of 10 with the race carded as the 13th of 14, one before the featured Fountain of Youth (G2) for 3-year-olds.