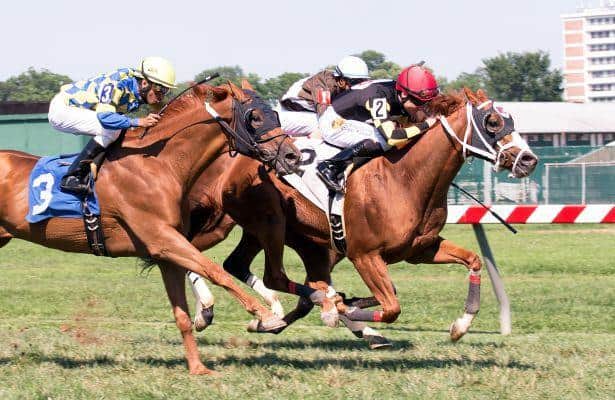 The upset victory over 1-5 favorite Phlash Phelps completed a sweep of the Maryland-bred stakes on Saturday’s nine-race Maryland-Virginia Breeders’ Day program for breeders Mike and Debbie Horning and trainer Bill Komlo, coming an hour after their victory with Debbie’s Tude in the $75,000 All Brandy Stakes.

“I don’t think I’ve ever had a day like this except the day I married my wife,” Mike Horning said. His wife, the inspiration behind the name Debbie’s Tude, is Komlo’s daughter.

A 5-year-old son of Grade 1 winner Jazil, Eyeplayeveryday ($19) was making just his second start in 10 months since running second to Phlash Phelps in last year’s Find. He was third, beaten 2 ¼ lengths, in a 1 1/16-mile third-level allowance June 3 at Pimlico.

“I was pretty confident. He ran in the Find last year and got beat a half-length and was flying at the end,” Mike Horning said. “We had to give him some time off and we were trying to get him a prep race. We got a three-other-than and it was a tough race, and he ran gamely. He got a little tired, I think, but it set him up perfectly for this.”

Hall of Fame jockey Edgar Prado sent 14-1 long shot Jack’s in the Deck to the front where they led through moderate splits of 24.16 seconds for a quarter-mile, 49.38 for a half and 1:14.39 for six furlongs, while Feargal Lynch and Eyeplayeverday were content to sit just behind.

“This horse right here has a big heart. No matter where we run him – slop, fast, grass – he’s there. Our horse likes to be in the battle. I told Feargal, when they come at him he’s going to kick it in gear and he’s going to go. He’s a nice horse,” Komlo said. “It’s good for the family. This is a family-oriented business. I’m happy for my daughter and son-in-law. They’ve got some nice horses now. They’ve got some really nice 2-year-olds, so I think they’ll be heard from this fall.”

Eyeplayeveryday dug in as English Minister came to him and held on to win by a neck in 1:49.61 for 1 1/8 miles. Phlash Phelps another neck back in third, three lengths ahead of Sonny Inspired. Jack’s in the Deck finished fifth.

“We had a plan going into the race that we were going to go to the front. Obviously when Edgar went to the front it was great, it gave him something to run at,” Lynch said. “In the stretch he just got out a little bit. I just let him come off that inside because I think it’s dead on the rail. I just let him come up the middle of the track and keep the momentum going. He dug hard for me all the way. He’s a tough horse and he’s tough to get by when he gets on that lead in the stretch. It was going to take a good one to come past him because he’s all heart.”

Phlash Phelps bobbled slightly coming out of the gate from post 1 and never got into a comfortable rhythm under Victor Carrasco. Blocked behind horses at the head of the lane, he managed to work his way to a brief lead in mid-stretch before being passed late.

“He fell down at the break and he just got outrun, that’s what it amounts to,” trainer Rodney Jenkins said. “Today he got outrun. He ran good. There were some nice horses in there. That’s just the way it goes.”

Her third time was the charm for Debbie’s Tude, who withstood a furious late rally from Ginger N Rye to post a front-running victory in the $75,000 All Brandy.

After running fourth in the 2014 All Brandy and fifth last year, her only previous stakes tries, Debbie’s Tude broke through with her first black-type victory in her 21st lifetime start. It was the second straight win for the 5-year-old Aptitude mare, after beating males in similar fashion in a $15,000 claiming event June 2 at Pimlico.

“We ran her with the boys and she put down good time. She trained exceptionally well and I thought if she got the lead and saved a little bit she might get there, and she did,” Komlo said.

“She’s only run four times in the last year because we couldn’t get her in the races. When we ran her against the boys the other day she went in 1:43 and change and looked pretty good, so we were pretty confident that she’d run good today.”

Breaking from outside post 6 as the field’s biggest long shot at 8-1, Debbie’s Tude ($18.40) was sent to the lead by jockey Luis Garcia and stayed there through a sensible quarter-mile in 24.73 seconds and half in 48.81.

Ginger N Rye, the 9-5 favorite, and stakes winner Candida H. continued to track Debbie’s Tude after six furlongs in 1:13.06 when she opened up a four-length lead turning for home. Under brisk urging from Garcia, Debbie’s Tude dug in as Ginger N Rye came charging to the wire and won by a head in 1:49.62 for 1 1/8 miles over a firm turf course.

Ginger N Rye was a length ahead Northern Smile and multiple stakes winner Monster Sleeping, who were separated by a head for third and fourth, respectively. Vielsalm and Candida H. completed the order of finish.

“I always thought this filly, especially with no speed in the race, when you go in front and you can slow it down, she’ll be tough at the end,” Garcia said. “When I felt that she slowed down and she relaxed going a half a mile, I know we were walking for that kind of race. I said, ‘Let me open up now before they come to close and then it would be different.’ I asked her and she responded right away. When that horse came she dug in again.”

There will be carryovers in both the 20-cent Rainbow 6 and $1 Super Hi-5 wagers on Sunday, the finale of the 28-day Preakness Meet at Pimlico.

No one had all six winners in the Rainbow 6, creating a carryover jackpot of $8,037.49 for Sunday’s eight-race program. Tickets with four of six winners returned $591.52.

If the Rainbow 6 is not hit Sunday, the jackpot will carry over to the opening of Laurel Park’s summer meet on Friday, July 1.