Lukas's Ethereal Road blows past the field in the Sir Barton 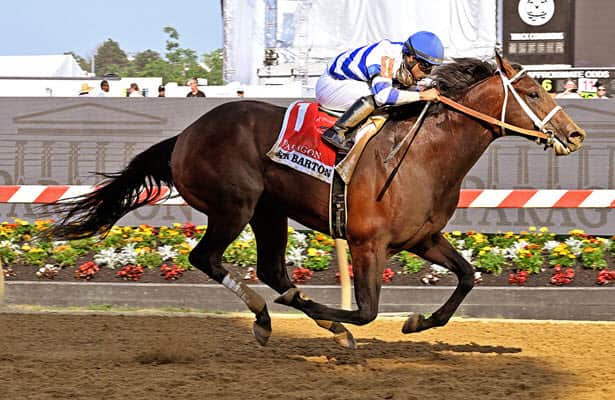 Favorite Ethereal Road and Luis Saez, who were last early, unleashed a sweeping move on the second turn and powered through the stretch to post a dominant win in the $100,000 Sir Barton Stakes at Pimlico on Saturday.

Trained by D. Wayne Lukas, Ethereal Road rallied on a fast main track that had been dominated by front-runners all day. The winning time for 1 1/16-miles was 1:43.20. California shipper B Dawk (7-2) for Doug O'Neill was second followed by Mr. Jefferson and Ruggs.

Two weeks ago, Ethereal Road was entered in the Kentucky Derby but had to be scratched the day before the race due to a minor setback. It's possible the son of Quality Road finally does join the Triple Crown fray in three weeks time in the Belmont Stakes.

That’s what we expected," Lukas said. "That’s his style. It was a picture-perfect ride from Luis [Saez]. We probably should have left him in the Derby, but that’s hindsight. He got a good trip. The fractions are realistic. We can definitely build off this.”

“He ran pretty nice," Saez said. "The pace was perfect for him. It’s the style he likes to run – break and make one move. He finished really strong.”

Ethereal Road was sent wide on the second turn, stormed past the field at the head of the stretch and held B Dawk to win for the first time since his maiden-breaker in January at Oaklawn Park. He returned $5.00.

Ethereal Road was previously second in the Rebel (G2), seventh in the Blue Grass (G1) and fourth in the Lexington (G3) most recently for owner Aaron Sones.

This story will be updated.