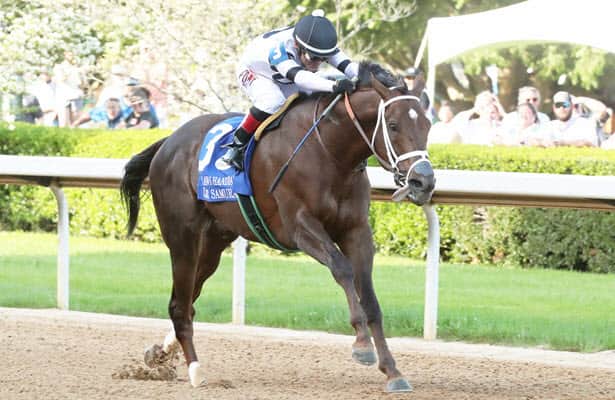 Lukas figures the 5-year-old son of Malibu Moon can be a player in Gulfstream’s top dirt race for older horses and sent him on a 1,200-mile van ride to South Florida.

“He’s dead-fit because we haven’t missed any dances,” Lukas said. “We’ve run him whenever his conditions came up. He is a talented horse in a lot of ways, especially with his finish. This is a chance to be involved in a $3 million race and maybe pick up a pretty good check.”

Related: Expect fast pace in Pegasus World Cup, but not a collapse

Last Samurai began his career with trainer Dallas Stewart, a former Lukas assistant, and was moved into Lukas’ care last summer by owner Willis Horton Racing. He is winless in his six starts for Lukas but has finished in the top three in half those races, all of them stakes. In his most recent start, he was second by a neck to Bal Harbour in the $200,000 Tinsel Stakes on Dec. 17 at Oaklawn. The Pegasus will be Last Samurai’s 10th graded-stakes appearance.

“He’s had some recency in his races, and he’s in top form,” Lukas said. “He’s a strong closer and being dead-fit and everything, we thought it was worth taking a shot. There seems to be an abundance of speed. We are realistic, but we think that if he finishes like he normally does we can get a big chunk of it.”

Frankie Dettori has been named to ride Last Samurai.

Lukas has had one Pegasus starter, Calumet Farm’s Bravazo, who was fourth in 2019.

Last Samurai has won four of 21 career starts and earned $1,101,039. His last visit to the winner’s circle was after his most important victory, the Oaklawn Handicap (G2) on April 23. He was forwardly placed by jockey Jon Court that day and won by four lengths at 12-1.

Lukas is in the midst of a late-career revival. Led by Kentucky Oaks (G1) winner Secret Oath, the Lukas stable earned $4,114,992 in purse money in 2022, easily its best figure since 2014. He won stakes with three horses and was active in the horse auctions, acquiring young talent for his clients.

In early December, Lukas was injured in a fall from a pony at Oaklawn Park.

“I’m healing up,” Lukas said. “I broke all of the ribs in my back. It was painful for a while, sleeping, sitting up and trying to get on and off my saddle horse. Getting on and off my saddle pony isn’t very pretty or very easy, but once I get on him, I feel pretty good.”

Lukas said his doctors told him it would take two months to recover from the fall.