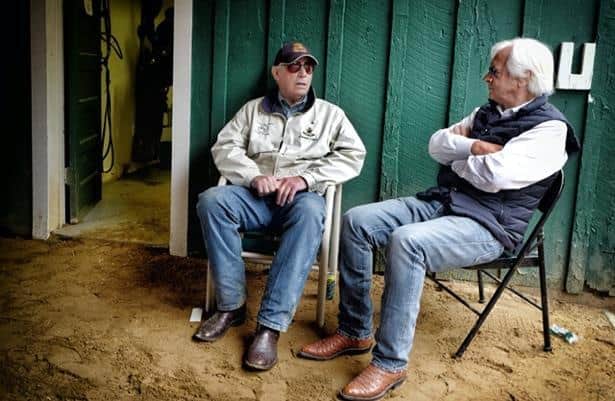 There is no doubting where D. Wayne Lukas may be found during any given Preakness week. Just look to the far southwest end of the Pimlico stakes barn. His buddy Bob Baffert was not there as used to be usual. But he was.

Holding court in a plastic chair, Lukas was there again Wednesday morning as he seems to have been since Pimlico was new. And no one remembers when that was.

“I like the main arena,” he said. “I like it very much. The whole atmosphere of these Triple Crown races has always been fun for me. I like the competition, so I enjoy it – this year or any other year.”

Lukas has had Bravazo and Market King and Ram in recent years. This year he brings Kentucky Oaks-winning filly Secret Oath to face male competition for the second time this season.

“We try to have one here every year,” the 86-year-old Hall of Famer said, looking out from under one of his trademark cowboy hats. “Sometimes we’re contentious. Other times I think we’re just in it.”

He is not “just in it” on Saturday. Secret Oath might be his best chance to win a Triple Crown race for the first time since he scored in the 2013 Preakness with Oxbow. On Monday the Arrogate filly was established as the 9-2 third choice on the Pimlico morning line. Measuring the best prices in Las Vegas, she was 5-1 on Wednesday. Only Kentucky Derby runner-up Epicenter at 5-4 carried a shorter price.

“He is definitely the favorite,” Lukas said of Epicenter. “A very nice horse. Very strong. He had a very strong Derby race. He’s justifiably the favorite.”

But Secret Oath showed a day earlier in the Oaks that she might be formidable in the Preakness. With Luis Sáez riding her for the first time May 6, she had a dream trip. She sat eighth, 4 3/4 lengths off the lead, and then she ran five wide when she accelerated to the front, poaching a hot pace on the way to a two-length victory.

Whether Epicenter sets the pace or lays off it Saturday cannot concern Lukas too much. Secret Oath still will be expected to close on him if she is to win.

“I think her style will complement her ability to get to him,” Lukas said. “He’s got great speed and everything, and she’ll drop back quite a ways from him if he goes with that early speed like he did in the Derby. She’s got the ability to catch him in a hurry. It’ll be interesting to see how it comes out.”

In other words, Epicenter has his strategy. And Secret Oath has hers.

“He’ll probably show the domination on the pace here,” Lukas said. “From what little I know, I don’t see anybody in the race here who will go with him. Maybe Chad Brown’s horse (Early Voting) a little bit. He’ll probably run that similar race. We will hopefully get just a smooth trip and a chance to run at him.”

Winning the Preakness was a linchpin lately for horses to win season-ending championships. Five first-place finishers in the ’10s went on to be named Eclipse Award winners as top 3-year-old males, most recently Justify in 2018.

Lukas said this year potentially will mark a return to that pattern.

“The winner of this race is going to jump right to the top of the class, whether it be a 3-year-old colt or a filly,” he said. “The Derby winner (Rich Strike) has not got the credentials yet to be up there.”

If Secret Oath were to win the Preakness by, say, daylight or open lengths or whatever other impressive margin came to mind, Lukas said he would like to entertain the thought of going against the boys again. The problem is he probably would be overruled by owners Stacy and Robert Mitchell, who already said they want to bring Secret Oath back into her own division to face fillies the rest of this year.

“I would be more open-minded than the owners. They are adamant that she’s going to run next in the Coaching Club (American) Oaks,” Lukas said, referring to the Grade 1 race for 3-year-old fillies July 23 at Saratoga. “I’m fine with that. I like the break and to have that time to regroup.”

With his wife Laurie sitting next to him, Lukas continued to take in the scene and field one question after another Wednesday morning, something that has become more and more of a ritual since he started coming to the Preakness 42 years ago, winning that year with Codex. He greets friends and rivals – sometimes one and the same – who made what they might consider a pilgrimage. For Lukas it was like old times.

“I’m comfortable here,” he said. “This place has been very good to me. I’ve been blessed.”

Blessed with horses who won the Preakness six times. He is one shy of the record established in the 19th century by Wyndham Walden and equaled in 2018 when eventual Triple Crown champion Justify gave Baffert his seventh. If Secret Oath wins Saturday, Lukas would join that club.

The only thing missing from the end-of-the-barn get-togethers Wednesday was Baffert himself. He is in the middle of a 90-day suspension because of the drug test that the late Medina Spirit failed after last year’s Kentucky Derby.

“That was him who called me,” Lukas said. “I’m going to return the call when we finish here.”

Baffert is missed, Lukas said. And not just by him.

“He’s good for the whole game,” he said, adding something for the visiting reporter. “He makes your job easier, too, if he’d have been here.”

“They can say what they want. They’ll miss him in the game until he’s back up. He’ll be back before you know it.”

But maybe not before Lukas earns a 15th classic victory to move him within one of Baffert’s record 16. If the greeting he got at Churchill Downs after winning the Oaks was any sign, Saturday could reach new heights of popularity for Lukas. The idea that he could sent a filly against the colts and win at age 86 could blow the minds of regular racegoers and mainstream sports fans.

“I think we’ve got a bigger fan base now,” Lukas said. “We’ve got more people pulling for us now than we did in the ’80s. Maybe it takes 60 years to get a fan base.”