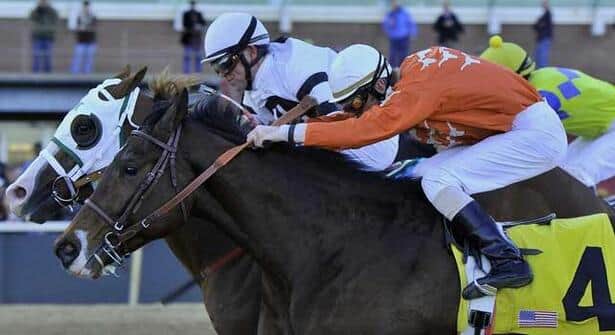 Hall of Fame trainer D. Wayne Lukas is back in a serious hunt for his 14th Triple Crown victory after Will Take Charge gave the trainer his second prep race victory of the weekend in Monday’s $150,000 Smarty Jones Stakes at Oaklawn. On Saturday, he had won the Lecomte Stakes with Oxbow at the Fair Grounds. Both races were worth 10 Kentucky Derby points to the winner based on the new criteria for making the field for the “Run to the Roses.”

Breaking from  post nine of nine, Will Take Charge was swung six wide into the first turn and settled into fourth as Californian invader Avare led through an opening half mile in 46 3/5. Still racing four wide after six furlongs in 1:11 4/5, the winner set his mind on winning entering the stretch and gamely out-dueled his nemesis Texas Bling to the wire, winning by a neck in 1:38 3/5 for one mile on a fast track. The last time the horses met, the order was reversed in the Springboard Mile at Remington Park December 9.

“This is unbelievable,” said owner Willis D. Horton. “He had kind of a rough race. It’s remarkable that he could still win. We’ve thought highly of him since we got him. We look forward to going forward with him, hopefully to the Derby.”

Always in a Tiz, the 9-5 favorite, encountered traffic problems, but could only manage third after getting clear late. He was followed by Stormy Holiday, Brown Almighty, Officer Alex, Avare, Best of Birdstone and King Henny.

Winning jockey Jon Court, who was also aboard Oxbow in the Lecomte, said the difference today from when he last rode Will Take Charge in the Kentucky Jockey Club November 24 was his mental state. The pair finished 13th that day and then Victor Lebron had the mount in the Springboard Mile when Will Take Charge was second.

“He had his mind on winning today,” said Court. “In his last race at Churchill (Kentucky Jockey Club), he was hot and excited. Today, he was calm, cool and collected.”