Lukas: Sir Barton could be path to Belmont for Ethereal Road 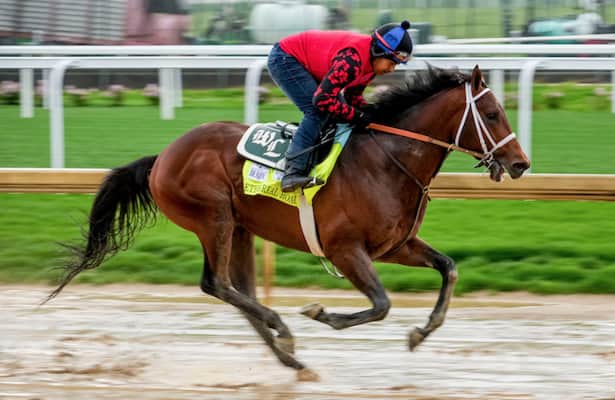 Hall of Fame trainer D. Wayne Lukas isn’t afraid to swing for the fences. But he also knows sometimes it’s best to take the base on balls when presented the opportunity.

Not that Saturday’s $100,000 Sir Barton is a gimme for the Lukas-trained Ethereal Road. But with the 1 1/16-mile race restricted to 3-year-olds who never have won an open stakes, it’s certainly a less formidable assignment than the $1.5 million Preakness Stakes, which is the centerpiece of the 14-race program at Pimlico Race Course.

“We’ll run him in the Sir Barton, maybe build his confidence, try to get a win,” Lukas said, “If he does really well in there, then we’ll jump into the Belmont Stakes. I think the Belmont would be a good fit.”

Lukas has taken some shots with Ethereal Road, the 3-1 second choice in the Sir Barton’s field of 10, with B Dawk the 5-2 favorite. Ethereal Road jumped from a maiden victory into Oaklawn Park’s Rebel (G2), finishing second. After a disappointing seventh in Keeneland’s Blue Grass (G1) April 9, Lukas wheeled the Quality Road colt back a week later in the Lexington (G3) to try to get additional qualifying points and secure a spot in the Kentucky Derby starting gate.

Ethereal Road finished fourth in the Lexington but squeaked into the 20th spot in the Derby field after a couple of horses were withdrawn from consideration. However, Lukas wasn’t satisfied with how Ethereal Road was doing and scratched him out of the Derby the day before – paving the way for Rich Strike to draw in off the also-eligible list at the last possible minute and then rally to win at 80-1.

A strong five-furlong work in a minute flat at Churchill Downs had Lukas beaming – though not quite enough to put Ethereal Road in the Preakness, for which he has Kentucky Oaks (G1) winner Secret Oath.

“Boy, he’s having a great week,” Lukas said, adding of the decision to go in the restricted Sir Barton rather than the Preakness. “I wonder if I really screwed up there. But he’s going in the Sir Barton.”

B Dawk was named by owner Joseph Besecker for Brian Dawkins, the former Philadelphia Eagles star defensive back who was inducted in the Pro Football Hall of Fame in 2018.

It took five starts – and the blinkers coming off in the fifth – for B Dawk to win a race. But then he did so by 11 1/4 lengths at Keeneland. Tyler Gaffalione, up that day, has the return mount as B Dawk stretches out to race around two turns for the first time.

“He ran super with blinkers off,” said trainer Doug O’Neill. “We're optimistic that two turns will do him well. He continues to train and work well.”

The 4-1 shot Unikee, a Gulfstream Park maiden winner who was a good second in a Keeneland allowance, likewise will tackle two turns for the first time for trainer Teresa Pompay.

The Sir Barton horse with the biggest following likely is The Elkstone Group’s The Addison Pour, a Maryland-bred 15-1 shot whose prior four races have been at Laurel for trainer Brittany Russell. That includes a nose victory in a 1 1/16-mile allowance race.

The Addison Reserve is the part of Delray Beach, Fla., where owner-breeder Stuart Grant lives.

“They have a couple of bars there,” he said, explaining The Addison Pour’s name. “And unlike most bars, where they pour you like 30 milliliters or one finger or whatever, this is a super-healthy pour, like an ice cube and then the top of the glass. It’s referred to as the ‘Addison Pour.’ A good friend of mine said you should name a horse that and I said, ‘Yes, we should.’ So we did.

Grant noted that the gelding, a son of Belmont Stakes winner Tonalist, could have run in a second-level Maryland-bred allowance race.

“But then you have to run against older horses,” Grant said. “So the question is, do you sort of keep them with your own age group but step them up in class? Or do you sort of not jump up to the stakes category, but then he’s got to run against older horses. Just on balance, we thought he’s been competitive in all four of his races, let’s give him a shot. And what a great spot.

“He’s sort of running on his home dirt. And it’s a race for non-winners of a stakes, so it seems like a really good place to try him,” he added. “But he’s going to have to step up. This is going to be a tougher race than he’s ever run before. But he has sort of met every challenge we’ve thrown at him, so we’re excited about him.”

The Mike Trombetta-trained Mr Jefferson, a Maryland-bred son of Constitution with odds of 6-1, comes into the Sir Barton after dropping a head decision in Laurel’s Federico Tesio.

Ruggs (10-1) comes in from Kentucky to take on stakes company after winning an Oaklawn Park allowance race at the Sir Barton distance.

“He’s a nice 3-year-old that’s putting it all together,” said trainer Ron Moquett. “We’re still tweaking about the distance. We don’t know for sure if he’s seven-eighths or a mile and a sixteenth yet. We still trying to put it all together. But he’s a very athletic and talented horse.”

The Rodolphe Brisset-trained Brooklyn Diamonds (10-1) also comes to Baltimore by way of Kentucky and Oaklawn, his last start being a second-place finish in a different 1 1/16-mile Oaklawn allowance race.

The Maryland-bred, Laurel-based Goldenize (20-1) has a 2-2-1 mark in five starts, all in sprints, as he makes his stakes debut after an allowance victory for trainer Timothy Keefe and jockey Forest Boyce.

Also entered are Writeitontheice, who shipped from trainer Rudy Rodriguez’s New York base to win a mile Laurel maiden race in front-running style; and Good Skate, third in an Aqueduct mile allowance.