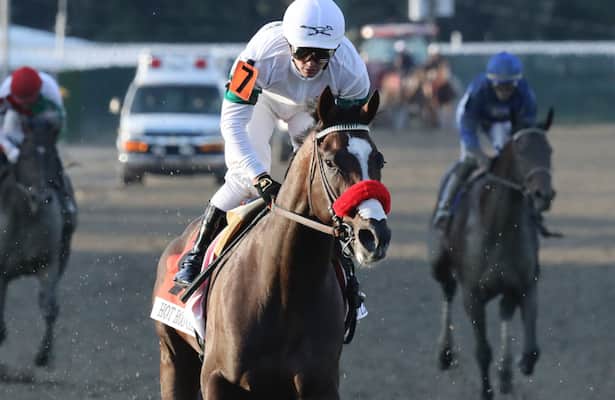 Get suggested wagers on Breeders' Cup preps with Super Screener

Hot Rod Charlie is the 8-5 morning-line favorite for the Grade 2, $500,000 Lukas Classic Stakes. Post time from Churchill Downs is 5:26 p.m. EDT Saturday, and the race can be seen on Churchill’s online video feed.

The Lukas Classic is one of three races Saturday that serve as Breeders’ Cup Classic auditions. The afternoon’s schedule also features the $500,000 Woodward Stakes (G1) at Aqueduct and the $300,000 Awesome Again Stakes (G1) at Santa Anita.

In 2021, Knicks Go cruised in the Lukas Classic as a 1-10 favorite. Five weeks later, he was much the best again in the Breeders’ Cup Classic at Del Mar.

Hot Rod Charlie leads a field of six who will hope to replicate that double Saturday at Churchill and Nov. 5 at Keeneland.

Trained by Doug O’Neill, Hot Rod Charlie has racked up $5.25 million over 17 starts. The 2021 Pennsylvania Derby (G1) victor is 1-for-4 this year, with a third-place effort in the Whitney Stakes (G1) on Aug. 6 at Saratoga as his most recent effort.

Hot Rod Charlie’s only prior race at Churchill was the 2021 Kentucky Derby, in which he crossed third behind disqualified victor Medina Spirit and recognized winner Mandaloun. Jockey Tyler Gaffalione will be up on the 4-year-old Oxbow colt.

Art Collector (2-1) earned Grade 1 laurels on this weekend last year at Belmont Park in the Woodward. He starts in the Lukas Classic off back-to-back stakes scores for trainer Bill Mott, including the Charles Town Classic (G2) on Aug. 26.

Happy Saver (5-2) has crossed first only once since winning the Jockey Club Gold Cup Stakes (G1) in October 2020 at Belmont. The Todd Pletcher trainee was runner-up to Life Is Good in the Whitney, marking a fifth straight second-place finish.

Rich Strike (6-1) races Saturday at Churchill for the first time since his late-running Kentucky Derby upset in May. He finished fourth Aug. 27 at Saratoga in the Travers Stakes (G1) for trainer Eric Reed and now battles older runners for the first time.

Here is a look at the field for the 2022 Lukas Classic Stakes (trainer and jockey in parentheses) with morning-line odds:

TimeformUS’ pace projections show favorite Hot Rod Charlie going out to the lead under Gaffalione in a race that could favor runners on or near the early lead.

Visit Horse Racing Nation’s free past performances page for more information on the Lukas Classic and some of Saturday’s other key races.

Handicapper Ashley Tamulonis has the Lukas Classic’s four Grade 1 winners in her superfecta for the race.

On this week’s Ron Flatter Racing Pod, trainer Eric Reed talks about the return of 80-1 Kentucky Derby winner Rich Strike to Churchill Downs for this weekend’s Lukas Classic. “Basically he’s going from the college to the NFL, and it’s his first game,” Reed says of Rich Strike’s first start against older runners.

The Lukas Classic may not be Rich Strike’s last start this season at Churchill Downs. Reed says the $750,000 Clark Stakes (G1) on Nov. 25 is an alternative to racing in the Breeders’ Cup.

Handicapper Ed DeRosa and Churchill Downs analyst Brandon Stauble discuss the specifics of Rich Strike's next attempt to make history, as well as the Ack Ack (G3), which is a Breeders' Cup "win and you're in" for the Dirt Mile.

Hot Rod Charlie and Rich Strike are among a number of Kentucky Derby alumni competing in the early weeks of fall.

Here is a look at other graded stakes taking place Saturday at Churchill Downs and elsewhere across the U.S. All post times are EDT.

Life Is Good (1-9) has taken eight of 10 lifetime starts, with his most recent victory coming in the Whitney Stakes (G1) on Aug. 6 at Saratoga for trainer Todd Pletcher. Jockey Irad Ortiz Jr. gets the call on the 4-year-old Into Mischief colt, who is heavily favored to earn a fourth Grade 1 win. Pletcher also trains Keepmeinmind (6-1), a Grade 2 hero who was fifth Sept. 3 at Saratoga in the Jockey Club Gold Cup Stakes (G1). Law Professor (8-1), another Grade 2 winner, switches surfaces after winning the Tapit Stakes on Sept. 1 at Kentucky Downs for trainer Rob Atras.

Be Your Best (6-5) is off to a 2-for-2 start to her career for trainer Horacio De Paz and aims to make the grade after winning the P.G. Johnson Stakes on Sept. 1 at Saratoga. Jockey Jose Ortiz pilots the Muhaarar filly in this Breeders’ Cup Juvenile Fillies Turf “win and you’re in” race. Chad Brown trains Free Look (9-5), who broke her maiden on second asking Sept. 4 at Saratoga. The Atras-trained Alluring Angel (9-2) was runner-up Sept. 13 at Kentucky Downs in the Untapable Stakes.

Arzak (4-1), a Grade 3 winner for trainer Michael Trombetta, looks to bounce back after finishing sixth Sept. 10 in the Kentucky Downs Turf Sprint Stakes (G2). Irad Ortiz will be up on the 4-year-old Not This Time colt. David Donk trains Thin White Duke (9-2), who aims to make the grade after winning the Lucky Coin Stakes on Sept. 2 at Saratoga. Voodoo Zip (5-1) was fourth in the Lucky Coin for trainer Christophe Clement.

Verifying (9-5) is morning-line favorite for this race that is both a Breeders’ Cup Juvenile “win and you’re in” event and a points-paying stop on the Road to the 2023 Kentucky Derby. Cox trains and jockey Joel Rosario rides the Justify colt, who won his debut Aug. 27 at Saratoga. Steve Asmussen trains Gulfport (2-1), a Churchill Downs stakes winner and Hopeful Stakes (G1) runner-up Sept. 5 at Saratoga. Top Recruit (5-1) climbs the class ladder for trainer Mike Maker off an Ellis Park Juvenile Stakes win Aug. 14.

Forbidden Kingdom (9-5) takes on older runners in his first start since settling for sixth April 9 in the Santa Anita Derby (G1). Hernandez will get a leg up from trainer Richard Mandella on the 3-year-old American Pharoah colt, twice a Grade 2 winner. Peter Miller trains C Z Rocket (7-2), the 2020 winner of this race, who was eighth in the Pat O’Brien. Todo Fino (4-1) ran the first 14 races of his career in Chile, then won his U.S. debut Sept. 3 in a Del Mar allowance event for trainer Amador Sanchez.

Gregorian Chant (5-2) finished fourth in this race one year ago and is morning-line favorite for the 2022 edition off a runner-up effort July 24 at Del Mar in the Wickerr Stakes. D’Amato has tabbed jockey Umberto Rispoli to ride the 6-year-old Gregorian gelding. Mandella trains Lane Way (4-1), second-place runner Sept. 4 in Del Mar’s Green Flash Handicap (G3). Air Force Red (5-1) made his stakes debut in the Del Mar Mile for trainer Leonard Powell, crossing fourth.

Country Grammer (8-5), winner of the Dubai World Cup (G1) in March, was best of the rest Sept. 3 in the Pacific Classic (G1) behind Flightline. Hernandez rides the dual Grade 1 winner, a 5-year-old son of Tonalist, for trainer Bob Baffert. Mandella trains Royal Ship (3-1), a Grade 2 victor who finished third behind Flightline and Country Grammer in the Pacific Classic. The Shirreffs-trained Express Train (7-2) crossed fourth in that race and earned a Grade 1 win over this course in March’s Santa Anita Handicap. A Breeders’ Cup Classic “win and you’re in” berth is on the line in this race.