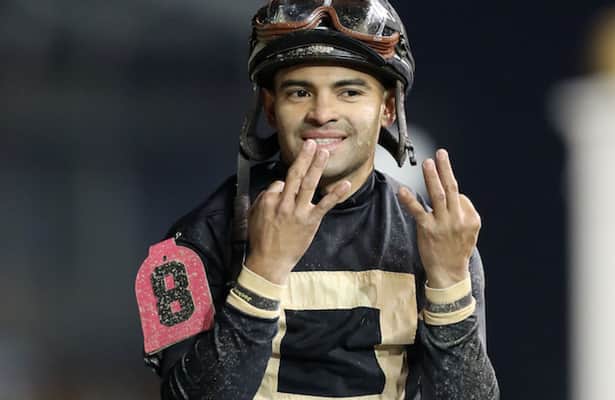 Buoyed by six wins on Saturday, jockey Luis Saez earned his first career riding title at Churchill Downs in the fall meet. His 23 victories during the meet, which ran from Oct. 30 through Nov. 27, put him two clear of Tyler Gaffalione despite the latter's rally on closing day.

In addition to leading in wins, Saez also led all riders with $2,476,015 in purse money. Though his only stakes win came with Instant Coffee in the Kentucky Jockey Club (G2) on Saturday, he won five six-figure maiden special weight races during the meet, including three on Saturday. He also finished second in the Clark (G1) with West Will Power, the Ed Brown with Mr Bob, and the off-turf Commonwealth on closing day with Stolen Base.

Jockey Tyler Gaffalione made the jockeys' race close, but he could not quite catch Saez. Coming into Sunday's card six wins behind Saez, Gaffalione closed the gap with four wins on closing day, including each of the first three races. He added a win in the sixth race with Joey Freshwater, whom he guided to a five-length victory in a maiden claiming dirt sprint for juveniles. But Gaffalione finished no better than third the rest of the day, allowing Saez to hold for the riding title despite not winning on closing day. With $2,084,733 in purses, Gaffalione was the only other jockey to eclipse the $2 million mark.

On the trainers' side, Mike Maker led all conditioners with 12 victories during the Churchill Downs fall meet, one more than Steve Asmussen. Maker's training title was his eighth career training title at the Louisville, Ky., track and his fifth during the fall meet. Maker's 12 wins did not include a stakes victory, though he trained Commonwealth second-place finisher Stolen Base. More proven on turf, Stolen Base had won the American Turf (G2) for Maker at Churchill Downs on May 7.

Trainer Steve Asmussen made a late rally, winning two closing-day races with Shell Shock in the first and Real News in the third. However, he finished no better than fifth the rest of the day, leaving the meet title with Maker.

Brad Cox finished the Churchill Downs meet third in wins, with eight. However, Cox's $1,215,892 in purse money made him the meet leader in that statistic, over Asmussen ($1,146,454) and Maker ($1,018,550). Cox's eight wins included a pair of graded stakes, the Kentucky Jockey Club with Instant Coffee and the Mrs. Revere (G2) with Bubble Rock. Rusty Arnold finished the fall meet fourth with six wins, and four trainers tied for fifth with five wins each: Ken McPeek, Al Stall Jr., Genaro Garcia and Matt Shirer.

The owners' race was tight, and in the end no one won more than three races. Seven owners tied for the fall meet title: Godolphin, Lothenbach Stables, Stonestreet Stables, Three Diamonds Farm, Jim and Susan Hill, the partnership of Paradise Farms and David Staudacher and Kyle W. Nagel. Notably, Nagle won his three races in only three starts. Floki's Flight won a maiden special weight on Nov. 9 and a starter allowance on Nov. 27, and Fantail won a claiming race on Nov. 18.