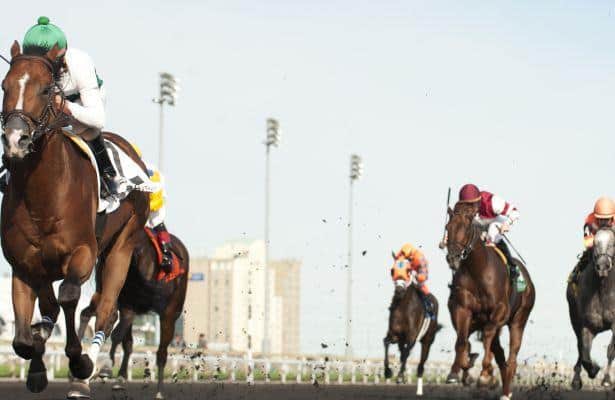 Trained by Mark Frostad and ridden by Robby Albarado, the lightly-raced son of Harlan's Holiday-Celebrate settled into a perfect stalking position in the 1 1/8-mile 'Poly' stake and responded with a powerful kick at the top of the lane for a stylish first added-money score.

Decision Day was sent to the early lead by Jesse Campbell, posting the opening quarter in :25.38 with Lucky Lindy, Firespike and Ethical Funds stalking comfortably.  Ethical Funds, under Emile Ramsammy, was sent after the front-runner through the opening turn and pressed the pace to the half in :50.08.

Lucky Lindy, rating from third under Albarado down the back straight, was urged into action through the final turn as Firespike and Breaking Lucky also launched menacing runs. Billy's Star, racing from the back of the pack, made his best run late in the turn but there was no reeling in an energetic Lucky Lindy who sped through the wire a 3 3/4-length winner.  Billy's Star, the 7-5 favourite, came on strong to earn place by 1 ¼-lengths over Breaking Lucky. Lucky Lindy covered 1 1/8-miles in 1:50.64.

Albarado, who guided Lucky Lindy to a second-place effort in the Toronto Cup and a third-place run in the Breeders' Stakes, third leg of the Canadian Triple Crown, earlier this summer, enjoyed a good stalking trip behind the moderate pace.

"I thought they'd go pretty slow up front and they did. When the one horse (Ethical Funds) ran up on the inside to go with Josie Carroll's horse (Decision Day) it helped me sit there a little longer," said Albarado.

Frostad is pleased with the development of the well-related Lucky Lindy, who is a half-brother to graded stakes winner Occasional View.

"It was only his fifth start," said Frostad. "He had some two-year-old issues, so it took him a little longer (to get to the races). He's coming along beautifully and I think his best racing days are ahead of him."

Lucky Lindy, bred in Ontario by owner George Strawbridge, Jr., banked $108,000 in victory, while improving his record to 2-2-1 from six starts.

Midnight Miley, piloted for the first time by Jesse Campbell, held off the rallying Don't Leave Me to win Sunday's co-featured $129,750 La Lorgnette Stakes, at Woodbine.

Trained by Julia Carey for Little Red Feather Racing, the bay daughter of Midnight Lute arrived at the 1 1/16-mile 'Poly' route for three-year-old fillies from an even fifth-place run in a turf allowance on August 22.

Tippany led the seven-horse La Lorgnette field into the first turn through a moderate opening quarter of :25.02 with Classyshadesofgrey and Midnight Miley chasing her early foot.  Don't Leave Me, the 3-5 mutuel favourite under Eurico Rosa da Silva, was last to the turn but improved up the rail to be third as Tippany took the field through a half-mile in :49.81.

Midnight Miley, confidently handled by Campbell, bid through the final turn along with Classyshadesofgrey, putting away that rival with a furlong to run and stayed strong to the wire for a head score over a charging Don't Leave Me. Dyna's Recoleta landed in third position, while Classyshadesofgrey and the late-running Shesanaturalblonde dead-heated for fourth. Midnight Miley covered 1 1/16-miles in 1:44.96.

Keeping Midnight Miley calm through the pre-race proceedings was paramount to victory.

"She (Carey) said to take her from the post parade and keep her with the pony but away from the other horses. Just try and keep her calm," said Campbell.

A patient trip engineered by the new rider was also a key factor to the upset.

"She was a little aggressive going into the first turn, but she settled pretty good for me," said Campbell. "We were going pretty slow, she was in my hands, but I was impressed with the way she fought down the lane. She really fought hard."

Midnight Miley, bred in Kentucky by Mark Secrest, banked $75,000 in victory while improving her record to 3-1-0 from 10 career starts.