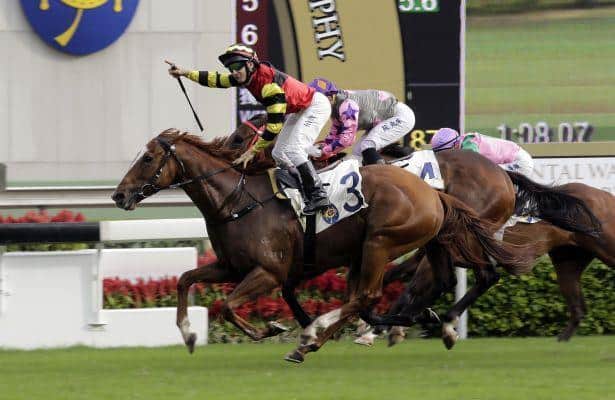 If any horse “deserves” a Group 1 win in Hong Kong, it is surely top-class sprinter Lucky Bubbles, and while Monday’s Centenary Sprint Cup (1200m) is now a G2, having been designated a HKG1 previously, trainer Francis Lui hopes that the sprint feature on the Chinese New Year card will pave the way for the five-year-old to gain a G1 win later in the season.

“He was really good in his trial last week and I’m very happy with how he is going,” Lui said. “He has not raced for a while but he’s holding his condition and he seems to be thriving. He is right where I want him to be now. Now, just to get a big race win, he’s been so close before!”

Lucky Bubbles, who is regularly partnered by Brett Prebble, has twice contested international G1 races for two narrow defeats, finishing second to Australia’s flashy grey Chautauqua in the G1 Chairman’s Sprint Prize (1200m) in May before he was just outgunned by Paul O’Sullivan-trained Aerovelocity in the G1 Hong Kong Sprint (1200m) last month.

However, Lui is confident that Lucky Bubbles (121lb) can turn the tables on Aerovelocity (126lb) with a five-pound pull in the weights, particularly as he was running home strongly last time out.

“He looks good for this race,” the handler said. “If he runs to his best, he should be winning, and Brett thinks he is near his best. But they are always tough races to win. If he doesn’t win, hopefully he can come back later in the season and win again.”

Lui is already looking past Monday’s feature, though, and is plotting the best path for his tenacious chestnut for this season and beyond in search of a top-level win, with a potential trip abroad in the offing.

“He’ll go through all three legs of the [Hong Kong Speed Series],” Lui said. “So he’ll go to the 1400m G1 (Queen’s Silver Jubilee Cup) in late February and then try to win the 1200m G1 in May that he came so close in last year (the Chairman’s Sprint Prize). The 1400m is a little unknown, he ran well over that distance but didn’t win last season, but it’s worth a try now he is older.

“He is entered for Dubai but I’d have to see how he is after the 1400m. It could be a little too much. Japan that same weekend (for the G1 Takamatsunomiya Kinen at Chukyo), no, because the race is anti-clockwise. If he travels, the most likely race for him is the Sprinters Stakes in October – that’s the most suitable, I think.”