Lovestruck improves to 2-for-2 with Tepin score 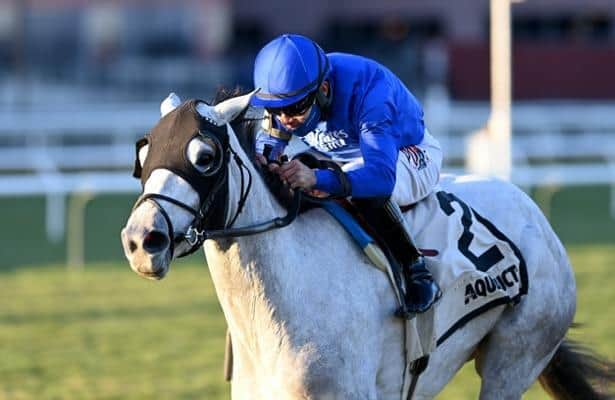 Lovestruck won her first stakes appearance in similar fashion to her career debut, staying off the pace before a strong stretch-drive kick to post a one-length victory in Sunday’s, $100,000 Tepin for juvenile fillies at Aqueduct Racetrack.

The Godolphin homebred was a one-length winner going 1 1/16 miles over the firm inner turf at Saratoga Race Course on Sept. 7. Hall of Fame trainer Bill Mott elevated the Tapit filly to stakes company for her second start, where she again won at the same distance, this time over an inner turf course rated good.

Lovestruck broke sharp under jockey Junior Alvarado from post 2, being forwardly placed in third position as 20-1 longshot Big Time Lady led the eight-horse field through the opening quarter-mile in 24.05 seconds, the half in 50.50 and three-quarters in 1:16.21.

Turning for home, Big Time Lady was kept inside by jockey Eric Cancel, but Lovestruck pressed on and overtook the pacesetter from the outside. Invincible Gal, piloted by Jose Ortiz, made a strong bid near the rail, but Alvarado set down Lovestruck to repel the threat and hit the wire in 1:47.14.

A stewards' inquiry focused on bumping at the head of the stretch between Big Time Lady and Lovestruck resulted in no change to the order of finish.

“She's been ready for quite a while,” Alvarado said. “We were expecting the kind of run from her that we saw today. There's still room for her to improve. She's still a little bit green and when she got to the lead she was wandering around the track, which is fine. When she puts it all together, we'll get a little more from her."

Off as the even-money favorite, Lovestruck returned $4.20 on a $2 win wager. She more than doubled her career earnings to $94,600.

“I knew she was going to be sharp, but I like to teach them to relax behind horses and have a nice finish,” Alvarado said. “I didn't want to just let her go. Even though it was a slow pace, I knew I was close enough that she wouldn't have too much to do at the end.”

Invincible Gal, fresh off an 11th-place finish in the Breeders’ Cup Juvenile Fillies Turf on Nov. 6 at Keeneland, outkicked Big Time Lady by 1 1/2 lengths for second. The Graham Motion trainee has run second in three of her four stakes starts, adding to her runner-up efforts in the Sorority in September at Monmouth Park and the Selima on Preakness Day, Oct. 3, at Pimlico.

“I had a beautiful trip. I found an opening on the inside in the stretch and I thought I had a shot to get there but the winner, she showed up,” Ortiz said. “She's the real deal.”

Island Treasure, Fifth Risk, Bravo Regina and Lexinator completed the order of finish. Thursday was pulled up and vanned off.

Frost Me was scratched, as were main-track only entrants Hit the Woah, Dollar Mountain and Malibu Curl.