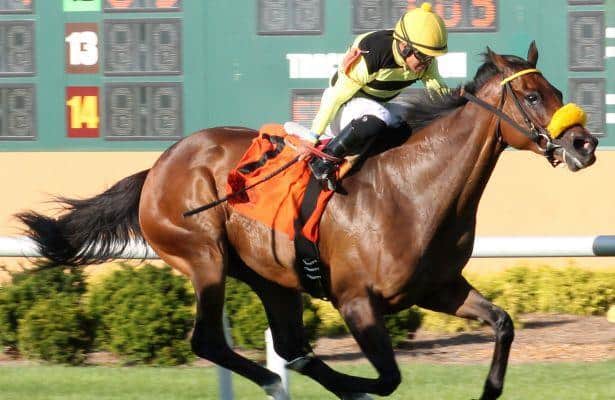 Judging by the way she’s acted this winter, that day isn’t coming any time soon.

“She’s become more difficult to gallop,” Boyce said Wednesday morning after entering Lovely Loyree in Saturday’s Grade III, $175,000 Lambholm South Endeavour Stakes at a mile-and-a-sixteenth on the turf. “We’ve even put a more severe bit on her so she doesn’t pull the arms off my exercise rider.

“She’s putting a lot into her work and training very forwardly.”

The Illinois-bred Lovely Loyree, who breezed 6 furlongs Sunday in 1:15.20 under jockey Daniel Centeno, is one of eight entrants for the Lambholm South Endeavour, which is the ninth race on the Festival Preview Day Presented by Lambholm South card. She will break from the No. 5 post.

“I just hope I’m not overmatching her,” said Boyce, knowing full well Lovely Loyree will need an outstanding effort to compete against the likes of Group/Grade I winners Dona Bruja and La Coronel. “There are some really nice fillies in there, and I have no prep races in her, which makes me feel as if I might not have her quite as tight as I would like her.”

On the flip side, Lovely Loyree will enter the starting gate with fresh legs, having last raced at September in Arlington. And Boyce is also buoyed by the outcome the previous times Lovely Loyree raced at Tampa Bay Downs – two years ago, when she finished third in both the Lambholm South Endeavour and the Grade II Hillsborough Stakes, both won by that year’s Eclipse Award Champion Grass Female, Tepin.

“When you’re on the board against Tepin, it’s a mark of accomplishment,” Boyce said, chuckling at the memory. “She’s as good a racehorse as you’ll see in many a year.

“(Lovely Loyree) put in a good effort in those races. I don’t know if she still has that ability, but she’s training well, and I’m very happy with that. I just haven’t had enough opportunity this year to run her.”

Lovely Loyree, who will be ridden by Centeno, is owned by Boyce’s Cherrywood Racing Stables II in partnership with Marty Nixon’s Feel The Thunder Stable, Margaret Burlingham’s Oak Rock Racing and Terry Biondo. In addition to her two graded-stakes placings here, she has won stakes at Hawthorne, Indiana Grand and Arlington.

The daughter of Grade III winner Cactus Ridge, who prefers to run on or near the lead, has a lifetime mark of seven victories, four seconds and five thirds from 19 starts, with earnings of $293,948. All but three of her starts have come on turf, where she is 6-for-16 with one out-of-the-money finish.

“He cut his leg very badly as a 2-year-old, so we gave him two years to heal,” Boyce said.

Boyce, who has saddled more than 500 winners, won the 2006 Grade III Hawthorne Derby on the turf with Best of Buddies for breeder-owner Barr Three, LLC, also the breeder of Lovely Loyree. She also trained Saint Leon, who raced until age 10 and won three consecutive editions of the Arlington Sprint Stakes from 2012-2014.

“I don’t do much in the way of 2-year-old racing,” said Boyce, who did not start Lovely Loyree until March of her 3-year-old year. “I will get them up and teach them some of the basics, but nine out of 10 will tell you somewhere along the line they need more time to grow and mature, either physically or mentally.”

The rewards come later, and Boyce knows that the appreciation runs both ways. She did not race Lovely Loyree from July of her 5-year-old season until last June because “she needed some down time and had some issues.”

In her return to competition on June 17, she won the Mike Spellman Memorial Handicap on the turf at Arlington at the Lambholm South Endeavour distance.

Boyce hopes Lovely Loyree can hang in there against the talented ship-ins and remind everyone of the determination and talent that make her special to Boyce and her crew.

“She has a mind of her own. She’s very happy to have you come over and pet her, as long as you’re bearing food of some kind,” Boyce said. “The barn loves her. When you have one that tries as hard as she does, you can’t help but love her.”