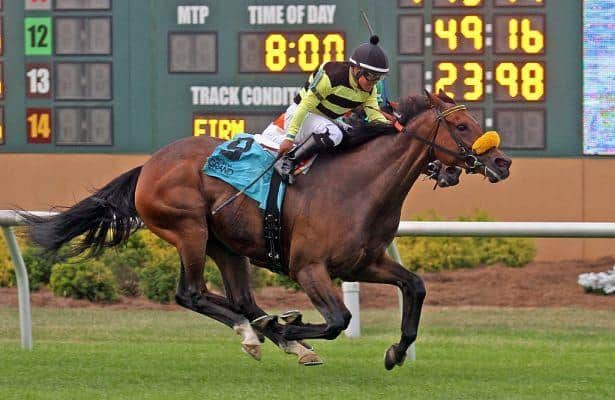 Chicago-based Lovely Loyree won Indiana Grand’s $100,000 Indiana General Assembly Distaff for the second time, wearing down Hachi to win by a neck Saturday while covering 1 1/16 miles over firm turf in 1:42.54.

“Oh my gosh, we won two years ago in stakes-record time,” said co-owner Margaret Burlingham. “Today was two seconds slower, but she did it. Fernando De La Cruz knows her, and she just did it.”

The Illinois-bred Lovely Loyree now is 8-4-5 in 23 starts, earning $368,648. It was suggested to Burlingham that she seemed surprise to win, with her mare paying $14 to win as the fourth choice in the field of eight.

“Well, she hardly ever runs,” the owner said. “We had to ship her Canterbury just to get a race under her (a fourth in the Lady Canterbury in her last start). Not one single allowance race went in Tampa. Not one. Completely rained off the turf at Hawthorne. Arlington, the allowance races didn’t go. Can’t get her to race. So we came back down here, and it didn’t rain for once. Hotter than heck but it didn’t rain.”

De La Cruz said trainer Michele Boyce told him “to put her right close to the lead. She was running to the stretch, thanks to God it worked out good. Everything was clear. She was good.”

The Chilean-bred Hachi, off at 15-1, was making her first start for trainer Brad Cox, who finished the day with three wins and two seconds in the five stakes in which he had horses. Hachi set the pace under Marcelino Pedroza, gave it up late to Lovely Loyree and was trying to come back at the wire.

Said Pedroza: “I thought I was going to come back to her for a second. My filly didn’t help me a little bit, because she was trying to get out. So that’s when he went by me, when I was trying to really correct my horse. So when I let her run, I thought for a second I thought I was going to come back, but the wire was right there. But she ran a big race. It was impressive the way she ran. Brad Cox always does so good — all the credit is to him.”

It was another length back to Kullachy Queen, followed by Res Ipsa, Queen Caroline, favored Lovely Bernadette, Sweet N Wicked and Sweet Legacy.