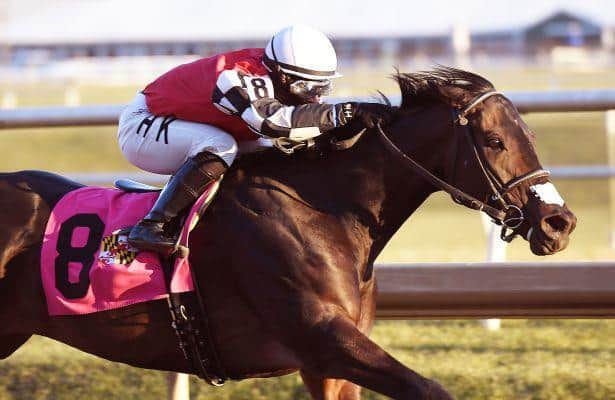 Showing off her affinity for the local track, Lovable Lady reeled in heavy graded stakes-winning favorite Hot City Girl approaching the stretch and sprinted clear after straightening for home to post a powerful 12-1 upset in Saturday’s $100,000 Willa On the Move at Laurel Park.

A 5-year-old daughter of Not For Love bred and owned by the Samuel H. Rogers Jr. Trust, Lovable Lady ($26.80) won for the fifth time this year and third in a stakes at Laurel, where she has a lifetime record of 5-2-3 from 11 starts.

She captured the Jameela on turf and the Politely on dirt, both at six furlongs, this summer and fall before having her three-race win streak snapped when third by a half-length as the favorite in the Maryland Million Distaff Oct. 22. Last time out, she faded to finish next-to-last in the one-mile Geisha, also against open company, Nov. 19.

“Today was about revenge because last time the filly didn’t run good. She didn’t decide to run last time, but today she was running,” regular rider Horacio Karamanos said. “She broke out of the gate and I tried to stay behind the speed a little but I couldn’t hold her. At the three-eighths pole she decided to go and I let her pick it up. I never asked her. At the top of the stretch she took the lead and I said, ‘Go home. Vamanos.’”

Lovable Lady broke sharply and outran New York shipper Hot City Girl for the early lead before dropping back and letting the 2-5 favorite take the field through an opening quarter-mile in 22.28 seconds. Lovable Lady remained keen on the leader, coasted to the front after running a half in 45.46 and kept rolling through the stretch, finishing in 1:09.56 to win by 4 ½ lengths.

“She’s been doing great. She’s been jogging and galloping; she just didn’t want the mile [last time] and she just got so rank in the middle of the race, he fought her and she gave up,” said winning trainer Mary Eppler, who leads the current fall meet standings. “I’ve never won a meet. Gosh, the barn’s worked so hard and they deserve the credit.”

Athena, winner of the Thirty Eight Go Go Stakes last December in her only previous trip to Laurel, closed to finish second. It was 2 ¼ lengths back to 2015 Charles Town Oaks (G3) winner Hot City Girl, making her first start since Aug. 18 with a foot abscess.

It was the third win of the day for jockey Alex Cintron and second stakes on the afternoon for trainer Hamilton Smith, who sent out Just Jack to victory in the $75,000 Howard M. Bender Memorial.

“He’s a pretty nice colt. He ran the best race of his life today, that’s for sure,” Smith said. “The way he took off down the lane made us feel pretty good. We might be able to get him to go a little further. He ran awfully huge.”

In Arrears, racing for the first time since exiting the Maryland Million Nursery with a minor issue, was sharp early as he battled with Hatteras Bound for the first quarter-mile in 23.44 seconds before taking over to run a half in 46.93.

Cintron had Greatbullsoffire ($8.40) poised to strike in the clear on the outside before sweeping to the lead after going six furlongs in 1:11.10. The Bullsbay colt continued to gain ground once straightened for home, opening up impressively in mid-stretch and finish up in 1:22.85 for seven furlongs.

Bonus Points rallied from far back to run second, 1 ¾ lengths ahead of In Arrears. O Dionysus, the 9-5 favorite who upset Greatbullsoffirre in the Christopher Elser Memorial Stakes Nov. 12, was another 2 ½ lengths back in fourth.

“The horse sat off good and at the three-eighths pole he was relaxed enough. The other horse was by himself in front but I knew I could get to him anytime I wanted,” Cintron said. “I moved up a little early just to make sure I got him, and when my horse switched leads in the lane he just drew off.”

Trained by Bernie Houghton for his aunt, Binnie Houghton, and ridden by Angel Rodriguez, Crabcakes ($6.60) went off as the 2-1 favorite in a field of eight and ran seven furlongs in 1:23.95.

“I’ve liked her the whole time. We actually had her down here one time when they canceled because of the wind and we had to go home,” Bernie Houghton said. “I basically stuck her in that [maiden] race just to kind of get one underneath her, but I’ve always liked her.”

Fear No Evil dueled with 40-1 long shot Happiest Ending through an opening quarter-mile in 23.18 and a half in 46.59 with Crabcakes tucked in behind. Rodriguez kept the Great Notion filly in the clear on the outside, where they ranged up on Fear No Evil rounding the turn and cruised past to win by 1 ¼ lenghts.

Lucky in Malibu, making her second start on dirt off her maiden victory Oct. 30, came running late for second while Fear No Evil was seven lengths clear for third.

A full brother to multiple stakes winner Talk Show Man, also owned by Harrison and trained by Hamilton Smith, Just Jack picked up his fifth win from 11 starts this year and first in a dirt sprint since late April. Following that he had sprinted on the turf and gone long on the grass and dirt.

“He ran a huge race. I thought it was a pretty competitive race myself,” Smith said. “He looks like he’s back to the dirt sprinting again. It looks like that’s what he wants.”

Just Jack ($18) was unhurried early as Morning Fire and Struth alternated through rapid early fractions of 22.70 second for the quarter and 45.55 for the half. Jockey Alex Cintron gave the 3-year-old Great Notion colt his cue rounding the far turn and he steadily gained on the leaders before running past in mid-stretch and hitting the wire in 1:09.50 for six furlongs.

It was 2 ¼ lengths back to Final Prospect in second while multiple graded stakes-placed Rockinn On Bye, the 2-1 favorite, rallied late for third.

“He came to this off of two longer distance [races] so he was ready to rock and roll and he showed that today,” Harrison said. “I think the best distance for him is six or seven furlongs, maybe a mile.”