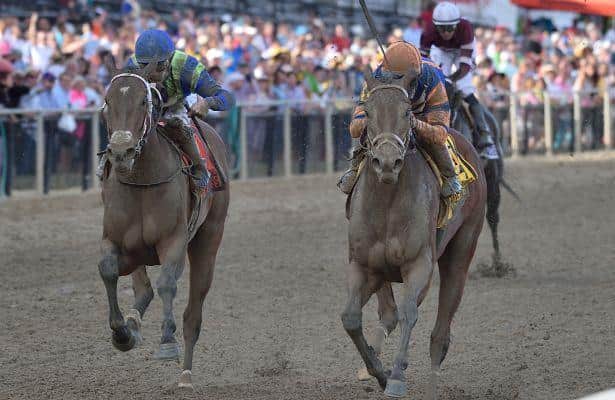 Trainer Todd Pletcher said graded stakes winner Lost Raven may skip Sunday's Grade 2, $300,000 Prioress in favor of the$100,000 Christiecat on September 9 at Belmont Park, which is contested at six furlongs on the turf.

Lost Raven, listed at 12-1 for the six-furlong Prioress on the main track, was set to make her turf debut in the 5 ½-furlong Coronation Cup on August 1, which ended up being moved to the main track. She won by a nose to add to her earlier win in the Grade 3 Miss Preakness in May at Pimlico Race Course.

"We kicked around the idea of possibly running her on the turf," Pletcher said of the Repole Stable 3-year-old. "It's an absolute guess. Some of the Uncle Mo's have run well on the grass. We were going to take a shot and run her on the turf in the [Coronation Cup]. So we're considering it."

Stradivari continues to recover well following surgery for a lateral condylar fracture of his right front leg last month, Pletcher said. The 3-year-old, who suffered the career-ending injury on July 22, had been recovering at Rood and Riddle Equine Hospital near the track.

"I saw him a couple of days ago and he looked good," Pletcher said. "He was out grazing. Knock on wood, he's still on the road to recovery."

Pletcher said he will not have an update on Theory until Tuesday, when he will be evaluated at Rood and Riddle Hospital in Lexington, Kentucky. A 5 ½-length winner in his debut on July 30, Theory was originally targeting the Grade 1 Hopeful before being taken out of training and sent home to WinStar Farm.

Theory, a 2-year-old bay colt, breezed five furlongs in 1:01.93 on August 20, but Pletcher said he thought something was slightly off in the work and shipped him to WinStar as a precaution.
Source: NYRA Communications
Theory Stradivari Lost Raven Todd A. Pletcher Repole Stable WinStar Farm LLC Saratoga Race Course Christiecat Prioress Christiecat (2016) Prioress (2016)