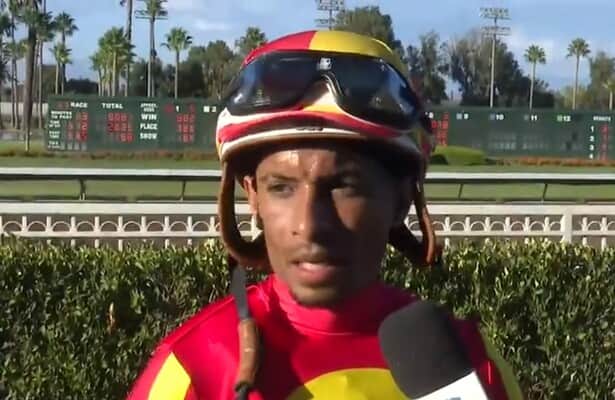 Jockey Ramón Vázquez won his second riding title in as many meets at Los Alamitos, and the 38-year-old native of Puerto Rico did so with a flourish.

The Sunday quintuple for Vázquez was completed when he directed 5-2 second choice Hard to Figure to an easy victory in the $75,000 Capote Stakes.

The final stakes race of the @losalracing Thoroughbred meet goes to #3 Hard to Figure under Ramon Vazquez, who gets his fifth win of the day! Hard to Figure is sired by @DarleyAmerica Hard Spun. pic.twitter.com/vkraawNaX8

A 2-year-old son of Hard Spun owned by Mike Pegram, Karl Watson and Paul Weitman and trained by Hall of Famer Bob Baffert, Hard to Figure collected his first win in the restricted event, prevailing by three lengths over stablemate and 1-2 favorite Massimo.

Racing without blinkers for the first time, Hard to Figure, who was purchased for $200,000 at an Ocala Breeders’ Sales auction in March, increased his earnings after three starts to $61,200.

“Taking the blinkers off might have made a difference,’’ assistant trainer Mike Marlow said. “He’s kind of a strong-headed horse, so we just wanted to try and stay away from everything and just leave him plain and let him be. I thought he had a good trip and ran a pretty strong race.’’

Vázquez, who topped the Los Angeles County Fair meet standings this year with a dozen wins, finished the September season with 13. His closest pursuer Edwin Maldonado had six.

“It’s great,” Vázquez said. “I didn’t know nobody had ever won five in a day here before. It feels good and gives me some (momentum) heading into Santa Anita (on Friday).”

Baffert and Peter Miller shared the top spot in the trainer standings. Each finished with five wins. It was the sixth time Miller and the 13th time Baffert either had led or shared the training title since daytime Thoroughbred racing returned to Los Alamitos.

Aguilar, 22, who has been exercising horses for Sippin N Kissin’s trainer Walther Solis, was greeted by a large contingent of friends and family in the winner’s circle, then was doused by several buckets of water by some of his fellow riders on his way back to the jockeys room.