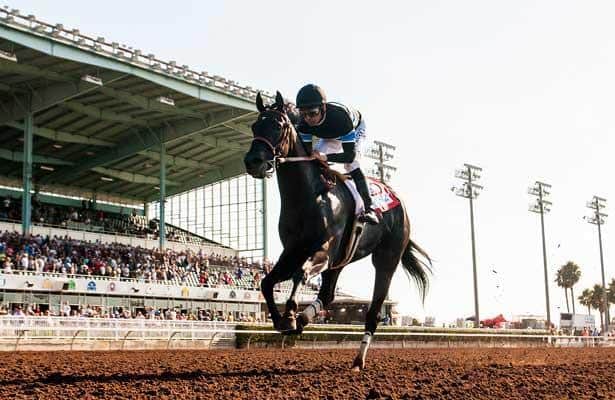 Post time for the 12-day season will be 2 p.m. Racing will be conducted on a Thursday-Sunday basis through Sunday, Sept. 25.

Track gates – including the Clubhouse and Vessels Club – will open at 9:30 a.m. General parking is free with grandstand admission $3 ($2 for seniors).

Included on the wagering menu are the $2 Pick Six, a pair of 50-cent Pick 4’s – races 2-5 and the final four races – as well as the Players’ Pick 5 – a 50-cent minimum wager with a reduced 14% takeout rate which is offered on the first five races.

The richest race of the meet is the Grade II, $200,000 Los Alamitos Derby. Restricted to 3-year-olds, the 1 1/8-mile Derby was run during the Summer Thoroughbred Festival in July the previous two years. Shared Belief won the 2014 renewal while Gimme Da Lute prevailed in 2015.

Saturday, Sept. 10 will feature the first two stakes of the season. Three-year-old fillies will travel six furlongs in the $75,000 Beverly J. Lewis while California breds – 3-year-olds & up - will run one mile in the $75,000 E.B. Johnston.

In addition to the Lewis and Johnston, Saturday will also be “California Chrome Day’’ at Los Alamitos.

In conjunction with a proclamation from the City of Cypress, Los Alamitos will honor its most famous resident and North America’s richest thoroughbred.

Although the 5-year-old son of Lucky Pulpit will not make an on-track appearance Saturday afternoon, fans are invited to watch California Chrome work that morning. He is scheduled to drill five furlongs at 7 a.m. for trainer Art Sherman as he continues to prepare for the Grade I, $300,000 Awesome Again Stakes Oct. 1 at Santa Anita.

A California Chrome plush toy will be given to the first 2,500 in attendance – with paid admission – and a presentation will be made by Cypress city officials to members of the California bred’s team, including Sherman. There will also be a video montage featuring highlights of California Chrome’s career.

A winner of 10 graded stakes, California Chrome’s victories include the 2014 Kentucky Derby and Preakness, the 2016 Dubai World Cup and, in his most recent race, the 2016 TVG Pacific Classic Aug. 20 at Del Mar.

There will be two other giveaway days during the meet – a Los Alamitos baseball cap (Sunday, Sept. 18) and a Los Alamitos carryall bag (Saturday, Sept. 24). Both items are one per paid admission while supplies last.

Besides the Barretts Debutante, the Sept. 17 program will offer a live money handicapping contest. On the line are at least five seats to the Daily Racing Form/National Thoroughbred National Handicapping Championship early next year in Las Vegas.

The main event on an eight-race opening day program that attracted 69 entrants is a one-mile starter allowance for 3-year-olds & up.

The field of nine includes five horses with at least one victory at Los Alamitos.

Atascaderan, a 6-year-old Decarchy gelding owned by Rafael Martinez and trained by Kelly Castaneda, is the most accomplished locally. The California bred has won three times over the surface, including a pair of wins during the Spring meet in April.

Out of the In Excess mare Celestial Being, Atascaderan has won five of 31 and banked $62,475.

Hawk’s Eyes is 0-for-3 at Los Alamitos, but enters in sharp form for George Castanares and trainer Lorenzo Ruiz. The 7-year-old Public Purse horse has won three of his last four and comes off a 15-1 upset Aug. 11 over the Del Mar turf course.