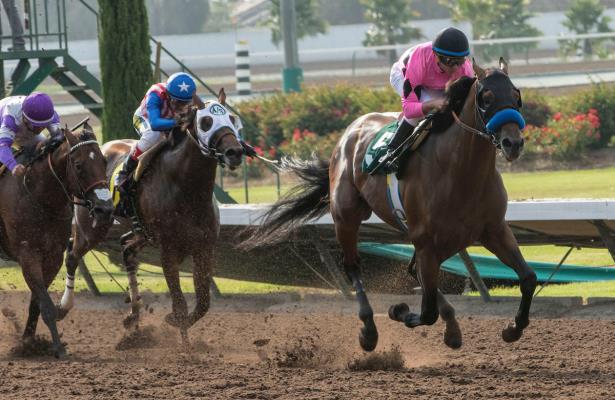 Photo: Casey Phillips/Eclipse Sportswire
Three stakes – including a pair a graded races – highlight the 2018 Summer Thoroughbred Festival at Los Alamitos.
The 12-day season will begin Thursday, June 28 and continue through Sunday, July 15. Racing will be conducted – with one exception – on a Thursday-Sunday basis. There will be a special holiday program on Wednesday, July 4. A dark day will follow (Thursday, July 5) before racing resumes Friday, July 6. Post time will be 1 p.m.

The Great Lady M., which is for fillies and mares – 3-year-olds & up – at 6 ½ furlongs, will be offered Saturday, July 7, and is expected to attract defending champion Skye Diamonds.

The other stakes race that will be offered during the meet is the $100,000 Bertrando for older California-breds at one mile. The fifth renewal will be run Wednesday, July 4. The field is likely to include Soi Phet, a 10-year-old who has won four stakes at Los Alamitos, including the inaugural Bertrando in 2014.

The wagering menu has been altered slightly as the minimum for the Pick 4 – which is offered daily on races 2-5 and the final four races – is now $1. This change from the previous minimum of 50 cents makes it uniform with the nighttime quarter horse programs where pools have soared in recent months.

The menu also includes the $2 Pick 6 as well as the extremely popular Players’ Pick 5 – a 50-cent minimum bet with a reduced takeout rate of 14% rate – on the first five races.