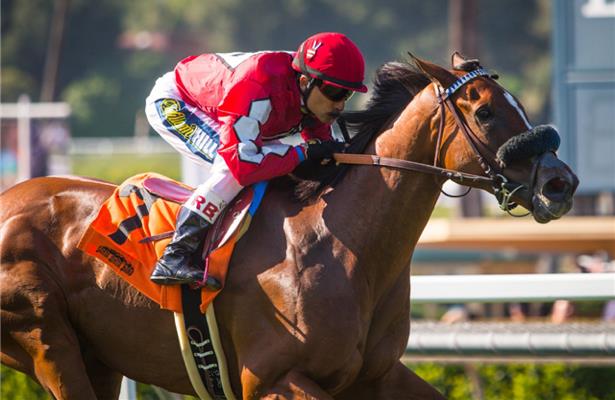 With a brisk early pace laying the foundation, Storm the Hill, in her first start for Phil D’Amato rallied from mid-pack to take Santa Anita’s closing day feature on Sunday, the Grade III, $100,000 Wilshire Stakes, by 1 ½ lengths.  Ridden by Rafael Bejarano, the 4-year-old Kentucky-bred daughter of Get Stormy got a mile on turf in 1:33.77.

Unhurried early from her number seven post position, Storm the Hill was able to save ground around the Club House turn and showed a nifty turn of foot in outrunning favored Ancient Secret the final three sixteenths of a mile.

“My filly has speed, but I could see that about four horses were going early, so I decided to just save ground,” said Bejarano.  “When we got to the half mile pole, I asked her to pick it up a little and we were able to follow the favorite (stablemate Ancient Secret) around the turn.  At the top of the stretch, we were able to get the first jump on her and she gave me a big kick.”

“She’s been training like a good horse,” said D’Amato.  “…She came from a great trainer (Eddie Kenneally), so all I had to do was maintain her.  They were really going fast early and I thought my other filly, Ancient Secret, was in a good spot.  But I think Storm the Hill, being a little further off of that fast pace, kinda helped her come on strong.”

Owned by Alastar Thoroughbred Company, LLC and Michael Valdes, Storm the Hill notched her first graded stakes win and improved her overall mark to 20-4-1-6.  Bred in Kentucky by William B. and Kimberly S. Bradley, Storm the Hill, who is out of the Good and Tough mare Thornhill, picked up $60,000 for the win, increasing her earnings to $250,485.

Ridden by Geovanni Franco, Ancient Secret, who broke from the far outside and was attentive to the pace throughout, was off as the 5-2 favorite and paid $4.40 and $3.20 while finishing a half length in front of Cordiality.

Cordiality, who made a brief lead turning for home, was off at 13-1 with Tyler Baze and paid $6.20 to show.

Live racing resumes at Santa Anita with the beginning of the 2018 Autumn Meet on Sept. 26.