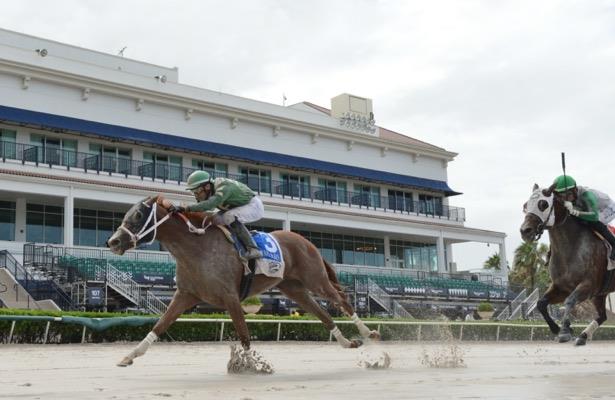 But in the words of trainer Michael Yates; “They don’t move the calendar for the (Sire) Stakes. So if you have a horse who can run a bit, even if they’re a maiden, it’s worth taking a shot.”

The shot taken was a winning one, as Go Jo Jo Go rallied down the stretch under jockey Leonel Reyes to win the FTBOA’s $100,000 Desert Vixen by 1¼ lengths over Princess Secret. It was another nose back to Freak in third.

Go Jo Jo Go, a 2-year-old daughter of Khozan, covered a sloppy six-furlong track in 1:11.47. It was the 13th Sire Stakes win for Gilbert Campbell and his Stonehedge farm. They would make it 14 a half hour later when Breeze On By won the $100,000 Dr. Fager.

It was Princess Secret, the even-money favorite, who took the field past an opening quarter of :22.59 while Go Jo Jo Go raced last in the eight-horse field down the backstretch. Pressed throughout, Princess Secret was challenged by a wide Freak entering the stretch, who opened up a length lead inside the eighth pole. But Go Jo Jo Go came flying on the outside to overtake Freak inside the final sixteenth. Princess Secret gamely came back for the place.

On winning the opening leg of the three-race series, Yates said: “It’s a great series for the Florida sires. It has a lot of history to it and it’s sort of what we aim for.”

Frankly My Dear and Oh Deborah were scratched from the Desert Vixen.