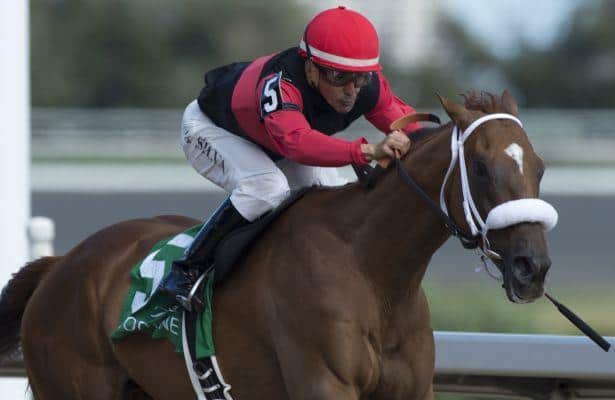 A veteran eight-horse field will look to conquer the longest race of the fall meet in the $200,000 Temperence Hill Invitational, run at 1 5/8 miles, on Sunday at Belmont Park.

Scuba, owned by DARRS, enters off a five-length victory in the Grade 3 Greenwood Cup on September 5 at Parx. The 5-year-old son of Tapit has registered Beyer Speed Figures of 90 or better in all six starts for trainer Brendan Walsh, including a career-best 96 in a second-place finish in the Grade 2 Monmouth Cup on July 31.

"He put up a great performance at Parx and I was very pleased," Walsh said. "He seems like he's doing really well and is in great form. We're ready to take a shot at it."

Scuba, 3-5-3 in his last 11 races, will be asked to go 1 5/8 miles for the first time in his career in leaving from post 6. Kendrick Carmouche, who piloted him to victory in the Greenwood Cup, will again have the call.

"He was really running hard at the finish in his last race, so I don't think the distance will be a problem at all," Walsh said. "If everything goes right, he should have a good chance. But it's a $200,000 stake, they aren't going to just give it away.

"There's no real trick - as he's gotten older, he's matured," he added. "He either likes the longer trip or he doesn't. That seems to be the key. Kendrick did a great job on him and they got along really well, so it looks like everything is in place for another big run."

Baccelo posted a third-place finish in the Seattle Slew last out on September 10 at Belmont. Owned and trained by David Jacobson, the Brazilian-bred Baccelo has finished in the money in his last six races, including a victory in the Grade 3 Philip H. Iselin on August 27 at Monmouth Park.

Baccelo will depart post 3 with Irad Ortiz, Jr. in the irons.

Old Time Hockey will be making his Belmont Park debut in his 42nd career start. The Gary Contessa-trained 7-year-old will be returning to stakes company for the first time since finishing third in the 1 ¾-mile Birdstone on August 10 at Saratoga Race Course, won by stablemate Turco Bravo.

"He's just a classy old horse," Contessa said. "He ran a good third and he's a natural at that distance. I like him. He has a shot. He's a difficult horse to place right now. This was a logical choice. It's not an easy spot, but the toughest horses in this race are not proven that they want to go a mile and five-eighths. This distance separates the men from the boys."

Old Time Hockey, owned by Martin Harrigan, will be seeking his first stakes win since the 2015 Millions Turf Preview at Gulfstream Park West. The Smarty Jones chestnut gelding will exit from post 2 with Junior Alvarado riding him for the first time.

"He's a big, sound horse and he likes the slop, so everything seems to be working in his favor," Contessa said. "I wish my whole barn was 6, 7, 8-year-olds because they're solid, predictable and healthy. Old Time Hockey definitely has a good place in my heart."

Melmich will make his sixth consecutive stakes start and should be fresh after winning the $125,000 OLG Elgin on August 31 at Woodbine. Since 2015, Melmich is 8-1-2 in 12 starts for trainer Kevin Attard, including victories in the Grade 3 Dominion Day and the Grade 3 Valedictory.

Extinct Charm has registered runner-up finishes in three consecutive starts, including the Albany, New York Derby and the Grade 3 Pegasus on June 19 at Monmouth. Trained by Bruce Brown, Extinct Charm will break from the rail in tandem with Dylan Davis.

Rounding out the field are Indycott, a 6-year-old dark bay gelding going for his first stakes win for trainer David Cannizzo out of post 5; Doyouknowsomething, who won against allowance company on September 11 at Belmont, will leave from post 4 for trainer A.C. Avila; and the Argentinian-bred Desvelo, a 7-year-old chestnut gelding trained by Kelly Rubley who is also looking for his first stakes win.