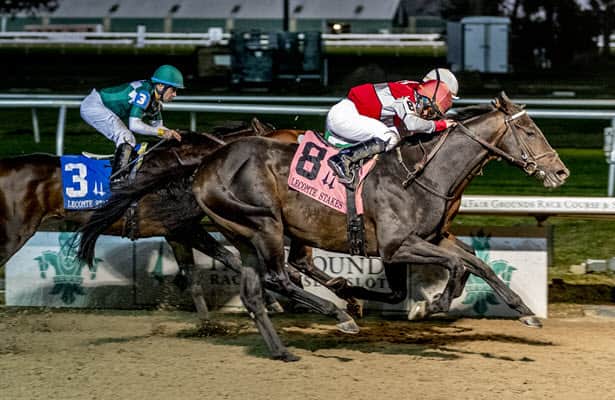 Front-running Epicenter and a fast-closing Call Me Midnight lunged to the wire in unison in the the Grade 3, $200,000 Lecomte Stakes at Fair Grounds on Saturday.

Call Me Midnight would get the decision officially by a head in a photo finish, springing a 28-1 upset under James Graham for trainer Keith Desormeaux. With the win, Call Me Midnight earned 10 qualifying points for the Kentucky Derby.

Epicenter collected four Kentucky Derby points for second. He was followed across the wire by 3-2 favorite and Breeders' Cup Juvenile runner-up Pappacap (2 points) with Trafalgar (1 point) rounding out the superfecta.

Epicenter, who previously won the Gun Runner, and Pappacap are now tied atop the Kentucky Derby leaderboard with 14 points.

Call Me Midnight, an $80,000 auction purchase last year for owner Peter L. Cantrell, was making his first start since a troubled off-the-board finish in the Nov. 21 Kentucky Jockey Club (G2) at Churchill Downs. The son of Midnight Lute earned his diploma one start prior to that at Churchill Downs.