Long River is the headliner in Evening Attire 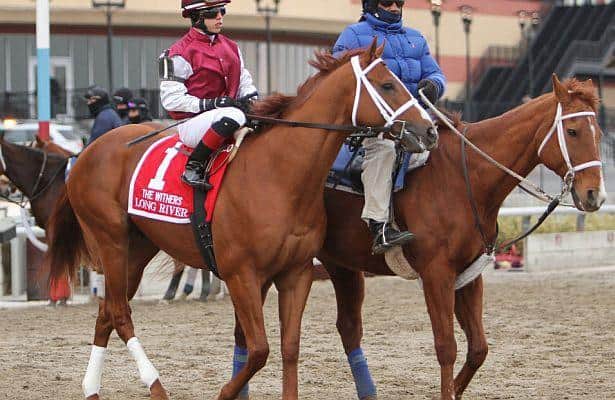 An accomplished field of older horses looking to further enhance their resumes will gather at Aqueduct Racetrack on Saturday for the 95th running of the $100,000 Evening Attire.

Five of the eight entries are stakes winners, and two come into the 1 1/16-mile race off stakes victories in December, including 5-2 morning-line favorite Long River, who took the Time for a Change by two lengths over Micromanage, and the Kelly Breen-trained Jonesy Boy, who won the Queens County by a neck over fellow Evening Attire entrant Don Dulce.

Trained by Kiaran McLaughlin, Long River will be making his first inner-track appearance since finishing eighth behind Revolutionary in the Grade 3 Withers last February. Subsequently off for seven months, the A. P. Indy colt returned to finish second in a first-level optional claimer in September at Belmont Park and four weeks later made a strong middle move to win by two lengths under the same conditions.

"He was going through some baby stuff and just needed time to grow up," said McLaughlin's assistant, Art Magnuson, of Long River. "He's come back a lot bigger and stronger; he's 100 pounds heavier than he used to be. He's taken a step forward every time he's run since he's come back, and we like to think of him in terms of the whole year. If he can step up a little more, he could be a good horse."

Irad Ortiz, Jr. will be aboard the 4-year-old Darley Stable color-bearer, who drew the rail.

Jonesy Boy, owned by George and Lori Hall, has been first or second in all six career starts. After finishing second in the Sam's Town at Delta Downs at the end of 2012, the 5-year-old son of Smarty Jones was sidelined for nearly a year, coming back to score a facile victory in an optional claimer in October at Laurel Park prior to the Queens County.

"He's a horse we have always thought highly of," said trainer Kelly Breen. "It's gratifying to have him come back well."

Jonesy Boy, 5-1 on the morning line, drew post position 6 and will be ridden by Rajiv Maragh.

Empire Classic winner Saratoga Snacks breezed an easy half-mile Monday morning in 50.43 seconds and appears to be over the minor foot issue that necessitated his being scratched from the Alex M. Robb for New York-breds on December 28.

"He looked great out there this morning," said Gary Sciacca, who trains Saratoga Snacks for NFL Hall of Fame coach Bill Parcells' August Dawn Farm. "We'll see how he comes out of the work and hopefully go from there."

Sciacca named Manny Franco to ride Saratoga Snacks, who was supplemented to the race and was listed as the 3-1 second choice on the morning line. The pair will leave from post position 3.

David Jacobson, 2013's top trainer on The New York Racing Association, Inc. (NYRA) circuit and currently the leading trainer at the Big A's inner-track meet, has entered the duo of the aforementioned Don Dulce and Cease, who romped by 9 ½ lengths in an optional claimer on New Year's Eve. Cease, a 7-year-old gelded son of War Chant bred by Claiborne Farm, was claimed by Jacobson for $100,000 in July and will be making his second stakes appearance for his new connections, having finished ninth in the Grade 2 Breeders' Cup Marathon for Jacobson and RAP Racing.

"We're very excited about running him, especially coming off his last race," said Jacobson of Cease. "We've gotten him back to where he was before the Breeders' Cup. The way he is right now, they'll have to do some running to catch him."

Don Dulce, another $100,000 claim by Jacobson, has finished second in three straight stakes races for Gold Square, including the I'm A Banker in October at Belmont and the Slew O' Gold in November at Aqueduct.

"We're hoping Don Dulce runs his race, like always," said Jacobson. "That, and a little bit of racing luck."

Rounding out the field are the Todd Pletcher-trained Percussion, most recently fourth in the Queens County; Cougar Ridge, victorious in his first two appearances on conventional dirt in November at Churchill Downs and in December at the Big A, and In the Beat, a supplemental entry making his stakes debut.