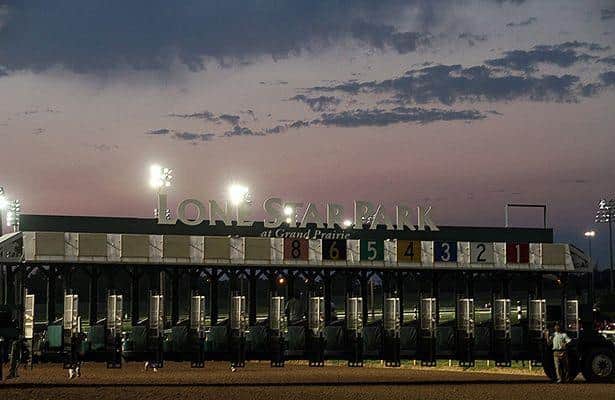 Lone Star Park canceled racing for the second day in a row Friday due to jockeys' concerns over medical insurance coverage, but will be back in action on Saturday.

Lone Star was slated to have an eight-program beginning at 7:35 p.m. EDT on Friday. Track officials sent out notice the card had been canceled shortly after 3:40 p.m. EDT.

Terry Meyocks, president of the Jockeys' Guild, told Horse Racing Nation earlier on Friday he was "hopeful" an agreement could be reached in time for Friday's races. It did not happen.

"Lone Star canceled tonight. It was their decision," Meyocks said. "But we're still hopeful we'll be back tomorrow. We've had some positive discussions."

Later on Friday, Meyocks said an agreement had finally been reached and racing would resume at Lone Star on Saturday.

Meyocks declined to offer any specifics on the negotiations, which Friday included track management, its insurance carrier and horsemen.

"We're just making sure the jocks are taken care of," he noted.

Lone Star has a $1 million insurance policy in place for injured jockeys, according to Meyocks, but this issue arose following a spill by jockey Carlos Montalvo on July 4. He said Montalvo has been unable to see medical specialists as part of his recovery.

"He's been trying to get into doctors, he tried over 20 specialists and none accepted it," Meyocks said. "Finally, in the last day or two, we got in with a few doctors but they want money up front. They want money from the jocks and that's unacceptable.

"Lone Star is doing what it can and we're hopeful it can be resolved," Meyocks continued. "We're trying to work with the insurance companies and make sure these jockeys are taken care of and don't have to pay $18,000 out of pocket. That has never been the case before."

Lone Star has a nine-race program scheduled for tomorrow with a first post of 1 p.m. It features four stakes headlined by the $300,000 Texas Turf Classic.

Lone Star Park is owned by Global Gaming Solutions, which is a wholly-owned subsidiary of the Chickasaw Nation. Attempts by Horse Racing Nation to reach a representative of the track were unsuccessful.