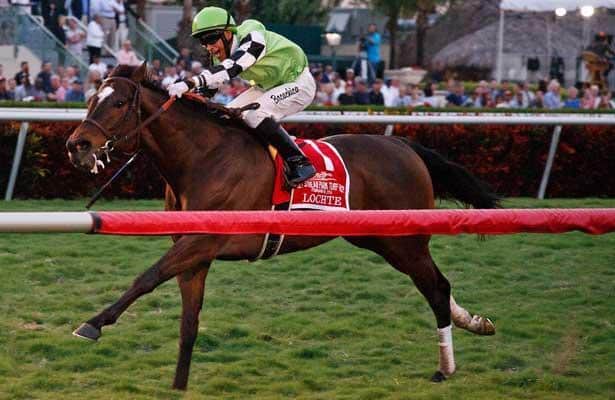 Lochte will be loaded onto a horse van at Gulfstream Park West Saturday for an eight-mile spin.

Trainer Marcus Vitali would ship 1,000 miles to give Lochte a chance to compete over the turf course at Gulfstream Park.

The 5-year-old has demonstrated a distinct fondness for the firmer going of the Gulfstream course in the past and is scheduled to seek a return to winning form in Saturday’s $200,000 Fort Lauderdale, a Grade 2 stakes at 1 1/16 miles on the grass.

“He’s a horse for the course. He loves Gulfstream,” Vitali said. “He loves firm courses. If he likes the course, you’re going to see the real Lochte. If he doesn’t like it, he won’t try.”

The real Lochte has always shown up at Gulfstream since finishing off the board in his debut on dirt in April 2013, winning four times and finishing second twice in six subsequent turf starts. His most important and stunning triumph at the Hallandale Beach track came in the $300,000 Gulfstream Park Turf Handicap (G1), in which he pulled off a 39-1 upset with a 2 ½-length score last February. The gelded son of Medaglia d’Oro has won only once in nine starts since the victory that gave owner Crossed Sabres Farm, Vitali and jockey Orlando Bocachica their first Grade 1 successes, taking the $80,000 The Vid Stakes over his favored Gulfstream course in September.

Lochte followed up his Gulfstream Turf win last February with a close second in the Kilroe Mile (G1) at Santa Anita and a third in the Maker’s 46 Mile (G1) at Keeneland before getting tripped up at Monmouth, where he finished 13th and eighth in stakes during the summer. He raced more competitively at Saratoga and Belmont before shipping back to South Florida. After returning to the winner’s circle at Gulfstream, Lochte was upset at 1-2 odds in an allowance race at Gulfstream Park West, where he then finished an even fourth in the Tropical Park Turf Handicap (G3) on Nov. 22.

“We had some trouble with him at Monmouth, but we’ve seen him through it. I think everything’s going in the right direction,” Vitali said. “I think we’re heading back up the ladder.”

Lochte is scheduled to meet 12 rivals (not including main-track-only entrant Protonico) in the 58th running of the Fort Lauderdale, and the Vitali trainee won’t be the only horse who is expected to appreciate the firmer going at Gulfstream.

Multiple graded-stakes winner Za Approval has had success over the Gulfstream Park turf course, as well as others throughout the country, during a career in which the 7-year-old gelding has earned $1.2 million. The Live Oak Plantation homebred has been worse than second once in six starts over the local turf, including a victory in the 2013 Appleton (G3).

Za Approval, who finished second in the Seabiscuit Handicap (G2) at Del Mar last time out, is scheduled to make his first start for trainer Mark Casse in the Fort Lauderdale. Joel Rosario has been named to ride.

The Todd Pletcher-trained Mshawish, who campaigned in France and Dubai before being shipped to the U.S. last summer, scored at first asking over the Gulfstream Park course to capture the $100,000 El Prado Stakes on Dec. 13. Previously, the 5-year-old son of Medaglia d’Oro won an $80,000 allowance over a firm Saratoga course before finishing an even third over a yielding Aqueduct course in the Knickerbocker (G3). Javier Castellano has the return mount aboard Mshawish, who is owned by Al Shaqab Racing.

Mutin, who also raced in Europe and Dubai, is scheduled to make his first start at Gulfstream after making a victorious U.S. debut at Aqueduct on Nov. 9.

“It was a good race. It was a tough race, too. It was his first start in a long time, first start for us, and he ran very well,” said Kiaran McLaughlin, who trains the 5-year-old son of Kentucky Dynamite for Shadwell Stable. “We were happy with the race. Therefore, we brought him down here and pointed him toward the Fort Lauderdale.”

Mutin has had a series of six turf workouts at Palm Meadows, Gulfstream’s satellite training facility in Palm Beach County, since his U.S. debut.

Silver Freak, a front-running allowance winner over firm courses at Churchill Downs and Saratoga, will go into the Fort Lauderdale with positive history at Gulfstream, where he captured an allowance race over the turf course early during last season’s Championship Meet.

“He put in a solid performance (in his last race). He ran well all year at Saratoga and at Churchill. The only disappointing effort was in the Woodbine Mile, where it was probably soft turf that day, and he didn't seem like he really liked it,” said trainer Brian Lynch, whose 6-year-old trainee checked in 10th in the Woodbine Mile between victories at Churchill and Saratoga.

Silver Freak, who has finished in the money in nine of 10 lifetime starts, will be seeking his first stakes victory Saturday. “He has been a very consistent horse. We space his races, and obviously he's gotten to a stage now where he's a difficult horse to find races for, because he's run through all his conditions,” said Lynch, who has awarded the return mount aboard Silver Freak to Julien Leparoux. “But fortunately enough, when he's ready, he shows up.”

Mucho Mas Macho, who captured the 2013 Fort Lauderdale at 41-1, and Howe Great, the winner of the Palm Beach (G3) two seasons ago, are both slated to attempt to recapture past Gulfstream glory Saturday.

Mosler, a winner of three races in six starts on dirt, is scheduled to make his turf debut for owner Adele Dilschneider and Hall of Fame trainer Bill Mott in the Fort Lauderdale. The 4-year-old son of War Front is scheduled to be ridden by Hall of Famer John Velazquez.

Fredericksburg, Tesseron, Grand Tito, Shiva Ryan and Golden Rifle round out the field.