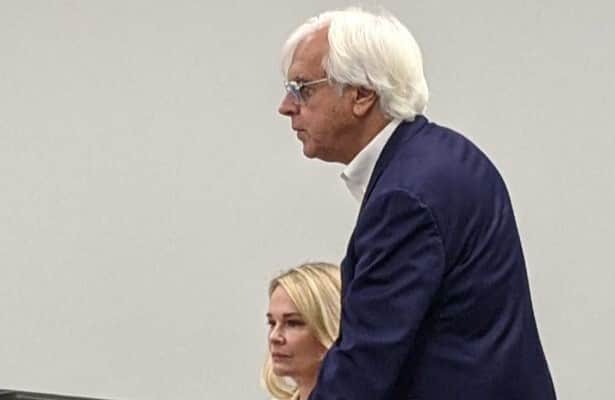 The KHRC requested that witnesses be sequestered during the course of the hearing so they would not hear one another's testimony. Clay Patrick, the presiding officer for the hearing, granted that request.

Jennifer Wolsing, general counsel for the KHRC, framed the case in straightforward terms during her opening statement. "This is a very simple case," she stated. "Betamethasone is a class C medication which has been prohibited in Kentucky."

Wolsing continued her opening statement with a discussion of Baffert's history of drug infractions in Kentucky. She explained that Baffert indicated that he did not know the betamethasone standards in Kentucky after Gamine tested positive for it after the 2020 Kentucky Oaks, citing text messages between him and chief steward Barbara Borden.

Wolsing also outlined Baffert's infractions in Kentucky in the year leading up to Medina Spirit's positive test. She noted that he had four violations during that time period and pointed out that Kentucky's documented sanctions for drug violations go only as far as three violations in a year.

Pointing out Baffert had four violations in 2020 and 2021, and showing KHRC sanctions for 1st-3rd offenses, Wolsing said “Mr. Baffert was literally off the charts with the KHRC.” #BaffertAppeal pic.twitter.com/lpjl2rZnfU

Monday's opening statements continued with Clark Brewster, an attorney representing Baffert. Brewster disputed the KHRC's claim that there was a "limit of detection" rule that could be applied. Brewster stated that his client had not been suspended in 30 years, and that in the last 20 years he had been subject to only five medication rulings against him.

In his opening statement, Brewster also sought to discredit Industrial Labs, which returned the positive test on Medina Spirit, suggesting that the company needed to come back with positive tests to stay in business.

Brewster also drew a distinction between injecting betamethasone and using it topically and cited a KHRC rule that permits ointments. He shared a photo of Medina Spirit's skin lesion and stated that Otomax, a skin ointment that contains betamethasone, had been prescribed for the lesion. Brewster quoted Barbara Borden, Kentucky's chief state steward, as saying that there was not a specifically stated threshold. Brewster also stated that the 14-day stand-down period should apply to the ointment.

Brewster submitted this exchange with the chief of stewards regarding the detection rule. #BaffertAppeal pic.twitter.com/xyLH5moDgP

Bob Baffert is called by KHRC to testify. #BaffertAppeal pic.twitter.com/x11Nslg7Ui

Wolsing presented Baffert with a copy of the trainer-responsibility rule, which Baffert said he was "probably" aware of. When Wolsing showed Baffert documents related to a 2020 medication violation in Arkansas, he responded, "They threw them out." After several questions, Wolsing was granted permission to treat Baffert as a hostile witness, meaning that she can ask him leading questions.

Wolsing went on to ask Baffert about the medication rule in Kentucky in 2020, about which he had the text conversation with Borden. After questioning, Baffert eventually admitted to not knowing the answer.

Wolsing repeatedly asks Baffert to say whether he knew the medication rule noted in the text messages of 2020 with chief steward Barbara Borden. Finally he said, “I didn’t know the answer.”

After that point, Wolsing responded, "You say you run a tight ship, and you know what the regulations are. ... But you told Miss Borden you didn’t know the rules."

This line of questioning led to objections from Craig Robertson, a member of Baffert's defense team, taking issue with the framing of Wolsing's questions about Baffert's knowledge of zero-tolerance rules, and alleging that Wolsing was misleading the witness by conflating injections and ointments. On the other hand, Wolsing alleged that the objections from Baffert's counsel was "feeding" Baffert answers.

When testimony continued, Baffert was asked to read the ingredient list for Otomax, which includes betamethasone valerate.

Wolsing asks Baffert to read the ingredients on a bottle of Otomax. They include betamethasone valerate. #BaffertAppeal pic.twitter.com/fBuaquvsPu

Baffert was also led to say that "regulators got it wrong" when they wrote a 14-day withdrawal period for betamethasone.

Wolsing then went into a line of questioning about Bob Baffert's relationship with and knowledge of Dr. Vince Baker, who treated Medina Spirit. However, Robertson objected, equating that to a trial of Baker. Patrick agreed, ending that line of questioning.

The hearing then moved to discussing Baffert's oversight of the barn. He had promised to be more vigilant in following regulations, but stated that COVID prevented an advising veterinarian from flying out to lead oversight in Kentucky. Baffert also stated that he did not reach out to the KHRC to verify whether Otomax was legal, since he thought it was compliant. Baffert continued, "I won’t say it was a mistake (to give Medina Spirit an ointment the day before the Derby). If you use an ointment to humanely heal a rash, it’s not a mistake." He compared Medina Spirit's skin condition to diaper rash, explaining that it is important to treat "right away".

Questioning then shifted to the positive test result. Baffert recounted how he heard about the positive test from assistant Jimmy Barnes. Then, questions focused on the details of the testing of Medina Spirit's sample.

Baffert then stated that Dr. Baker had convinced him Medina Spirit had not been given betamethasone, hence the statement at his May 9, 2021 news conference.

Baffert said Dr. Vince a Baker initially convinced him that Medina Spirit had not been given betamethasone. Thus his May 9, 2021, news conference. #BaffertAppeal pic.twitter.com/DtuhIrUxq7

After a brief break, Baffert was questioned further about his statement that Medina Spirit had not been given betamethasone. Wolsing also asked Baffert about a phone conversation with Borden that had been taped. Baffert stated that he was unaware that the conversation was taped, but Kentucky is a one-party state, meaning that the call could be legally taped with only one party on the line being aware of that fact. Baffert stated on the call that there would not be any salves in the barn, and stated on the stand that it was his belief at the time.

Questioning moved back to the May 9, 2021 news conference. Video of part of the conference was played at the hearing, and Baffert stated that his confidentiality had been violated, and alleged that either the KHRC or the testing lab leaked the results of Medina Spirit's positive test.

Baffert was on the witness stand for about 2 1/2 hours on Monday, and he was the only witness to be questioned during Monday's portion of the hearing, which concluded at 5:20 p.m. EDT. It will resume Tuesday at 9 a.m. EDT, when Wolsing plans to call Kentucky chief steward Barbara Borden.
Bob Baffert Kentucky Horse Racing Commission