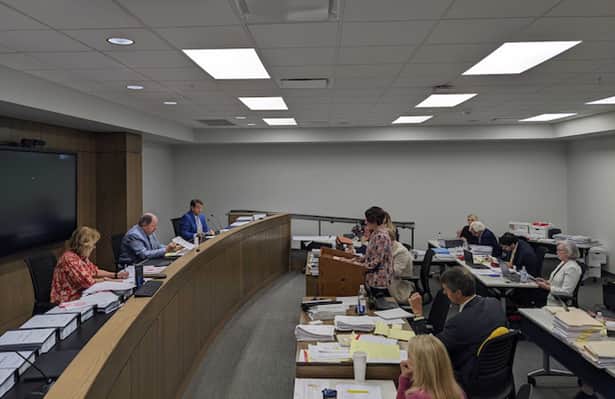 Horse Racing Nation's Ron Flatter is in Frankfort to follow the proceedings, which began Thursday with attorneys wrangling over how much expert testimony should be heard.

Jennifer Wolsing, the lead attorney for the Kentucky Horse Racing Commission, said she had two depositions to back up her contention that Medina Spirit could have been injected with betamethasone, rather than having it applied as an ointment, a point that generated further discussion.

Attorneys for both sides and presiding officer Clay Patrick eventually agreed that University of Kentucky research professor Dr. Scott Stanley would testify. He had been sequestered from hearing earlier testimony.

He was questioned about a study by Dr. George Maylin, director of the New York State Equine Drug Testing lab. Maylin and his lab were called on in a court order that the Baffert team got to do a third test on the Medina Spirit samples. Maylin concluded last fall that the medication "resulted from the topical administration of Otomax and not an injection of betamethasone."

Stanley criticized the process by which Maylin tested the Medina Spirit urine sample and offered technical reasons why it was flawed.

“I don’t agree with ... Dr. Maylin’s conclusion that says the data definitively shows the topical administration of betamethasone. ... I don’t believe that the data definitely concludes that.”

After Volsing finished her questioning, Stanley was cross-examined by Baffert attorney Craig Robertson. "I do not have any evidence that Medina Spirit was injected with any product," Stanley said.

Questioning from both sides was finished, and the attorneys then argued about whether Stanley could be recalled to the stand after Maylin testifies. Patrick said he would think about it.

After a lunch break, lawyers discussed scheduling. Dr. Benjamin Moeller and Dr. Mary Scollay are on deck for the KHRC, which is expected to rest Thursday. Then team Baffert will start to make its case. After Thursday's proceedings, the hearing will resume Monday, and the attorneys began negotiating ways to save time. Apparently, they would like to be done by the close of business Tuesday.

Moeller, of the University of California, Davis, appeared via Zoom. His lab did not do the original test of Medina Spirit but was called on to analyze the split blood sample after the first positive after the 2021 Kentucky Derby.

Moeller explained the steps that were taken to test Medina Spirit's blood sample.

Under questioning from Baffert attorney Clark Brewster, Moeller addressed confirmation procedures, specifics in the data and whether, as Brewster suggested, there might have been a reason for the UC Davis lab to repeat the test that revealed a betamethasone positive.

Next up was Scollay, executive director of the Lexington, Ky.-based Racing Medication and Testing Consortium.

Scollay said there was no record of a diagnosis when Dr. Vince Baker called for Otomax to be applied to Medina Spirit in April 2021. “Otomax is FDA-approved for use in dogs. .... I would hesitate to describe Medina Spirit as a dog. That would be most unfair.”

Baker is a veterinarian whose expertise Baffert said he relied on to declare at first that his staff had nothing to do with Medina Spirit’s failed drug test.

Scollay also said there was no record provided on the dosage of Otomax and its frequency. “There’s no evidence here that the horse had an ear infection to warrant the use of this. … The (Kentucky Veterinary Medicine Practice Act) requires you to keep records.”

Under cross-examination, Brewster attacked Scollay's credentials for lacking backside experience, saying that Baker has had a great deal of experience in stable work. And he recounted when, in a deposition, Scollay said anyone wanting more expertise on Otomax should ask a veterinarian who works on the backside.

Under questioning about betamethasone by KHRC lawyer Luke Morgan, Scollay said, "“I don’t know the extent to which it would affect a horse’s performance. If it relieves pain and inflammation, I imagine it would help a horse.”

Also, on the on lack of studies on betamethasone in an ointment, Scollay said, "The fact that there’s a lack of science means there is unknown risk, and the risk is born by those who choose to use it.”

With attorneys saying they were finished with their questioning, the hearing adjourned until Monday.

The hearing began on Monday, when attorneys for Baffert and for the commission made opening statements and Baffert took the stand to defend actions he took with the colt. On Tuesday, Kentucky's drug rules took center stage. Wednesday morning brought expert testimony from Dr. Heather Knych, an equine pharmacologist from UC Davis, involving pharmacology.

Wednesday afternoon was taken up by a private, parties-only session. A person with knowledge of the private session yesterday afternoon told  HRN Thursday that it was to go over Industrial Laboratories' concerns about offering testimony in this case that could compromise some of its procedures that it considers proprietary.