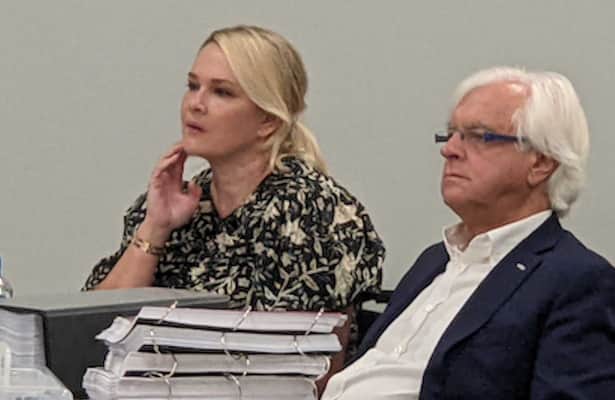 The hearing began on Monday, when attorneys for Baffert and for the commission made opening statements and Baffert took the stand to defend actions he took with the colt. On Tuesday, Kentucky's drug rules took center stage. Read a full report on Tuesday's proceedings here.

Horse Racing Nation's Ron Flatter is in Frankfort to follow the proceedings, with University of California-Davis veterinarian Dr. Heather Kynch appearing Wednesday morning via Zoom. She is an expert in equine pharmacology and was questioned by Baffert attorney Joe DeAngelis.

Knych said she agrees with the KHRC's categorization of betamethasone as class C medication. She said it has the potential to be performance enhancing, because it can be a masking agent to cover an existing injury.

"In sufficient concentrations, it's a potent anti-inflammatory. It has the ability to mask lameness or injury."

A 2016 KHRC case involving Graham Motion and medication was raised to show the commission's fiat to regulate. It led to a back-and-forth over whether it should be brought up in the discussion of systemic effects of corticosteroids.

Jennifer Wolsing, general counsel for the KHRC, stated for the record that, based on the 2016 Motion case, when there is gray scientific area with regard to medication, the KHRC still is allowed to regulate. Knych admitted that some betamethasone research is not conclusive with regard to horses.

After a break, DeAngeles cross-examined Knych, asking mostly about details of betamethasone and corticosteroids in general. After 3 1/2 hours of testimony, Knych was done and the hearing took a lunch break.