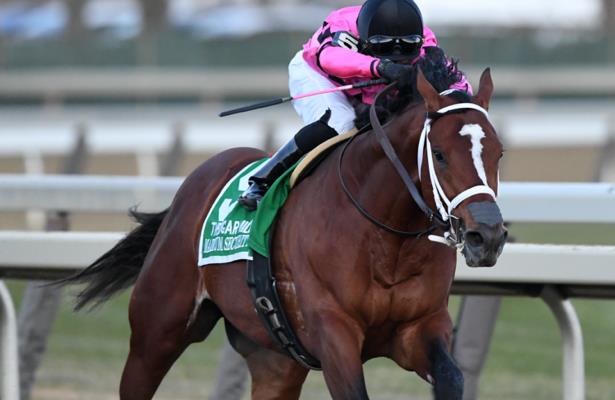 Champions across 17 human and equine categories were announced Thursday evening at the Eclipse Awards, where at Gulfstream Park the top turf horse Bricks and Mortar and his connections cleaned up.

Of 254 eligible voters, 241 submitted ballots for the Eclipse Awards assembled by the National Thoroughbred Racing Association, Daily Racing Form and the National Turf Writers and Broadcasters.

Horse of the Year/Male Turf Horse: Bricks and Mortar

He started six times in 2019, with five of those races in Grade 1 company, and won them all. Starting with the inaugural Pegasus World Cup Turf (G1) in his second start off a layoff, the Chad Brown-trained son of Giant’s Causeway went on to win on the Kentucky Derby and Belmont Stakes undercards; won the Arlington Million (G1); then finished off his career by stretching out to win the Breeders’ Cup Turf. Since then, Bricks and Mortar has retired to stand at stud in Japan.
Other Horse of the Year finalists: Maximum Security, Mitole

It's the start of what figures to be a big night for Bricks and Mortar, who went 6-for-6 last year and is officially 2019's Champion Male Turf Horse! pic.twitter.com/XicyrVQjef

A sweep! ?? Bricks and Mortar is the 2019 Horse of the Year, and his connections were all crowned champs tonight, too: https://t.co/6egCd6cKuS pic.twitter.com/OEkvhuRZW2

While she ran in the shadow of Chad Brown stablemate Sistercharlie for most of 2019, 5-year-old Uni enjoyed a brief but wildly successful campaign, winning three of her four starts, including winning a Breeders’ Cup Mile victory over the boys. That effort, a key score over division rival Got Stormy, followed a commanding score in Keeneland’s First Lady (G1) that led connections to supplement to the championships. Uni gave Brown his first Breeders’ Cup Mile win. She’ll be back in 2020.

Other finalists: Got Stormy, Sistercharlie

Two champs named, and they're both from the Chad Brown barn. Uni's the Champion Turf Female of 2019! pic.twitter.com/LHuOsyBw0V

A five-time winner in 2019, LNJ Foxwoods’ Covfefe always fired, with her only defeat a third-place finish in a rare midseason try against older competition at Churchill Downs. The Brad Cox-trained daughter of Into Mischief won every other start, along the way setting a track record in Pimlico’s Miss Preakness (G3), defeating the Kentucky Oaks heroine Serengeti Empress in Saratoga’s Test (G1) and taking down the home team, Bellafina, in the Breeders’ Cup Filly & Mare Sprint.

Male Sprinter: Mitole
Mitole won six of seven starts in 2019, rising from an allowance start off a lengthy layoff to take a trio of Grade 1 races. He sandwiched in between the Churchill Downs (G1) and Forego (G1) a signature score in the Metropolitan Handicap (G1), which assembled one of the deepest groups of older horses seen outside of the Breeders’ Cup. A victory in the Breeders’ Cup Sprint put an exclamation point on a championship campaign.
Other finalists: Imperial Hint, World of Trouble

What a rise! Mitole's climb to the top ends with a 2019 championship as top Male Sprinter. pic.twitter.com/fx5jNGt3eT

Three-Year-Old Male: Maximum Security
A rollercoaster sophomore campaign ended with an Eclipse Award for the polarizing Maximum Security. He started the year fresh off a $16,000 maiden claiming race victory at the end of 2018 and parlayed that to signature wins in the Florida Derby (G1), Haskell Invitational (G1) and Cigar Mile (G1). Along the way, he became the first horse to be disqualified for interference in the Kentucky Derby, survived a bout of colic and won six races, failing to cross the wire first one time, while earning $1,801,900.
Other finalists: Code of Honor, Omaha Beach

Having overcome adversity on and off the track, Maximum Security's rollercoaster 2019 season resulted in a title as top Three-Year-Old-Male! pic.twitter.com/arBnYWNwXi

Trainer Brad Cox waited until mid-August to unleash his Flashback filly owned by Michael Dubb, The Elkstone Group, Madaket Stables and Bethlehem Stables. But when he did, the bargain $40,000 purchase won at first asking at Saratoga, then followed that up with a commanding win in the Alcibiades (G1) at Keeneland. British Idiom capped it all off with a Breeders’ Cup Juvenile Fillies victory over the upstart Donna Veloce. She earned $1,381,250 while running her record to 3-for-3.

She's 3-for-3, a Breeders' Cup winner and now a champion! British Idiom claims the third Eclipse Award of the night for the Brad Cox barn as top Two-Year-Old Filly. pic.twitter.com/SMlKtQ6ZqY

Two-Year-Old Male: Storm the Court
Winning the Breeders’ Cup Juvenile goes a long way towards taking home 2-year-old Eclipse Award honors. Storm the Court is the latest evidence of that. While it can be argued that his win at Santa Anita came thanks to favored Dennis’ Moment’s stumble, the Peter Eurton trainee went gate to wire to take the biggest race of the 2019 season for freshmen colts and geldings. Additionally, Storm the Court was a Del Mar debut winner who placed in the American Pharoah Stakes (G1).
Other finalists: Maxfield, Structor

Older Dirt Female: Midnight Bisou
For much of 2019, she was touted as a possible Horse of the Year candidate, winning seven straight graded races to open the campaign, including Grade 1 scores in Oaklawn Park’s Apple Blossom and Saratoga’s Personal Ensign. The Steve Asmussen trainee, who runs for Bloom Racing Stable, Madaket Stables and Allen Racing, suffered her only defeat of the year in the Breeders’ Cup Distaff. By then, this championship was a forgone conclusion.
Other finalists: Blue Prize, Elate

And to think, she's back for 2020! It's official: Midnight Bisou's the Older Dirt Female Champion. pic.twitter.com/XgACDqcSS8

Older Dirt Male: Vino Rosso
Going out on top, Vino Rosso put in the performance of a lifetime to win the Breeders’ Cup Classic for trainer Todd Pletcher. That dominating victory at Santa Anita in November swayed Eclipse voters to choose Vino Rosso over Mitole and McKinzie in this vote. Vino Rosso won two Grade 1 races in his final campaign, also taking the Gold Cup at Santa Anita last May, then returning in November to win the Classic. Vino Rosso won six races throughout his career, but the final start defined him.
Other finalists: McKinzie, Mitole