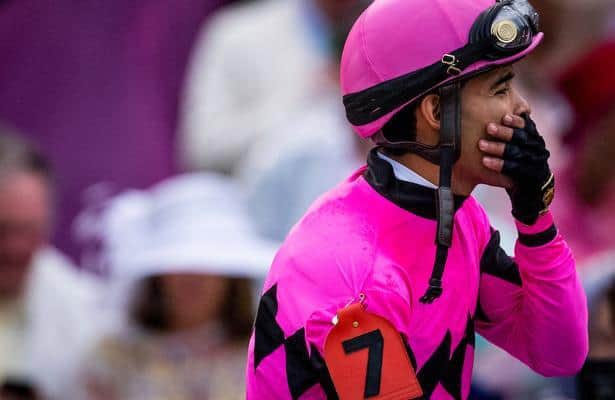 Ann Oldfather, attorney for Luis Saez, over the weekend provided recordings and transcripts of the jockey’s May 10 film review with stewards that resulted in what Oldfather termed an “unduly harsh” 15-day suspension exiting the Kentucky Derby.

The suspension was to begin May 23 but has been delayed while under appeal.

After the Kentucky Derby, in which Maximum Security veered off the rail and was deemed to have interfered with his rivals following two rider objections, stewards placed the colt 17th, behind Long Range Toddy, and promoted Country House to the victory.

“It was really not my intention to come out or, you know, bother somebody,” Saez said during the hearing. “My reaction was keep my horse straight.”

Saez’s peers supported that view, with audio available in full below:

“Like Luis said, his horse saw something,” Gaffalione said. “His horse switched leads. He grabbed him as soon as he could, but the damage had already been done. And no fault of Luis — just things happened that day.”

“Luis Saez did not do anything on purpose,” Landeros added. “This was the horse. You can see it. I mean, we ride horses day in, day out. He switched leads on him, and it’s hard. Especially, at that point of the turn, it's really hard… He had horse. I felt like he did everything he could.”

After the Derby, Prat lodged an objection with his outrider while still on Country House. Later, Court was said to have done so as well when speaking to stewards over the phone.

During the film review, Court, who was vocal exiting the Derby about young jockeys’ actions, focused on his issue with Gaffalione’s tactics.

Gaffalione said he noticed Maximum Security roll off the rail through the turn and return to it. At that point, he made a move, but it coincided with Maximum Security’s more severe veer near the 5/16ths pole.

“I advanced into that space, and that's when…everything happens,” Gaffalione said. “I never pushed on Jon — never forced my way out. The spot opened up, and I took it.”

Saez speculated that Maximum Security may have reacted to contact from behind as War of Will trailed closely through the turn at Churchill Downs. That conflicts with his original account after the race when he cited a wall of crowd noise.

“In that moment, when I felt — maybe the crowd, because man, I was so happy that I win the Kentucky Derby,” Saez said. “That was the dream for everybody. And I (didn’t) really know really what happened.”

“My horse never bobbled — never made any stumble,” Gaffalione said of War of Will. “So there is — it's impossible for me to clip heels with him. Because if anybody would've been affected, it would've been me. And I would've ended up on the ground. So that statement is a little out there.

“But once again, I'm not blaming Luis. His horse saw something. He spooked from it.”

In suspending Saez, stewards cited “failure to control his mount and make the proper effort to maintain a straight course thereby causing interference with several rivals that resulted in the disqualification of his mount.”

In a statement, Oldfather said last month that "the stewards’ ruling is completely unsupported and the suspension is unsupportable. We look forward to the opportunity to present proof that Luis is not at fault and should not have been suspended or disciplined for any reason.”