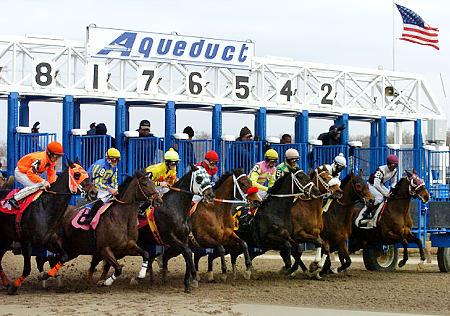 Lion D N A captured the co-featured $100,000 Interborough on New Year's Day at Aqueduct Racetrack with a hard-fought victory over a salty group of filly and mare sprinters.

After tracking the pace set by Baby J along the rail, the bay daughter of Lion Heart found ample clearance turning for home and inched her way past runner-up Fantasy of Flight and third-place finisher Baby J en route to a half-length score. The trio was separated by only a length on the wire.

"We got off just OK," said winning jockey C.C. Lopez. "I was quickly outrun, so I said, 'All right, there's only five horses. I'll just bide my time, stay on the fence and hope to work out a trip.' When I came off the elbow, I eased out, and she came running."

The win was the 5-year-old mare's first stakes victory and her second win from five starts for trainer Rudy Rodriguez since being claimed for $35,000 on August 30 at Saratoga Race Course for owners Michael Dubb and Bethlehem Stables. Lion D N A returned $7.90 for a $2 win bet and covered the six furlongs in 1:11.88. She has now earned $275,898 from 27 career starts.

The 8-5 favorite, Delightful Quality, checked in fourth, beaten 1 ½ lengths, while it was another 2 ½ lengths back to the trailer, Miss Mischief.