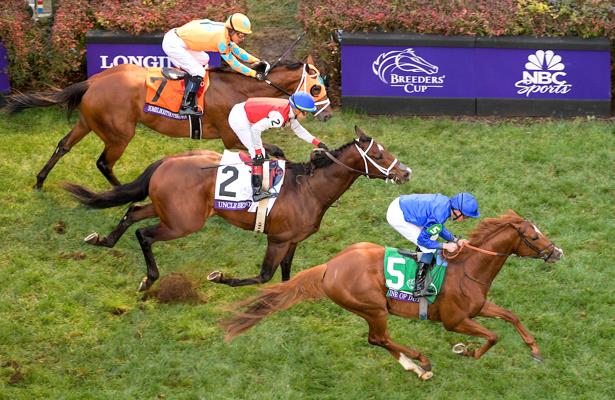 Line of Duty scored for the overseas invaders Friday, taking a late, outside run to win the Breeders’ Cup Juvenile Turf at Churchill Downs.

It came with plenty of controversy, as connections of runner-up Uncle Benny claimed foul. Stewards examined the finish for more than five minutes before holding Line of Duty atop the order.

Somelikeithotbrown led nearly the entire way before tiring in deep stretch and setting up a three-way battle for the lead. Uncle Benny looked primed to go by before Line of Duty bumped him and surged ahead late.

The final time for the Godolphin runner, ridden by William Buick and trained by Charlie Appleby, was 1:40.06.

REPLAY: LINE OF DUTY (IRE) WINS the #BC18 Juvenile Turf on #FutureStarsFriday at @ChurchillDowns. ??

Buick, stuck in traffic throughout, angled out, and looked like Line of Duty may hang late. But Buick guided his mount back in toward the competition, and the son of Galileo re-fired.

"This horse, he just loves to be driven," Appleby said. "The harder you drive him, the more he finds. It was a fantastic ride by William."

Multiple points of contact between between Line of Duty and Uncle Benny prompted Irad Ortiz Jr.'s objection. Stewards focused on the latest one.

"I probably could have won the race, but I'm going to leave it in the stewards' decision," Ortiz Jr. said.

Minutes later, the result was confirmed.

"He said he got him on the turn and he got him again before the wire," Uncle Benny trainer Jason Servis said Ortiz Jr. relayed.

"...My father was a steward for years. I've got to respect their opinion."

Uncle Benny ultimately got the photo for second over Somelikeithotbrown.

The victory is the result of a thawed relationship between world breeding and racing giants Coolmore and Godolphin, with this the first graded Godolphin runner by a Coolmore sire. Line of Duty was making his fifth career race and had won the last two, including a Group 3 event in France.

For Appleby, it was also a third Breeders' Cup win from five starters.