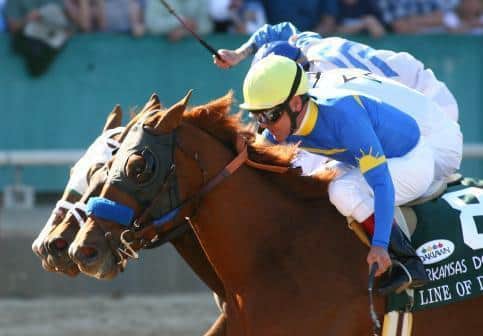 Speed is deadly at Oaklawn Park and Lion of David had plenty to burn in the Arkansas Derby (G-1), leading every step of the way to post a neck victory over Super Saver in a final time of 1:49.37.  In his first three starts,

Line of David showed nothing over Cushion Track or Pro-Ride, but once they put the blinkers on and switched him to turf, he reeled off two straight wins. After the confidence booster, his wily trainer John Sadler shipped the muscular chestnut colt to Oaklawn Park to win his third consecutive win and first graded stakes. Did the red comet take advantage of a track playing kindly to front running speed or is there something more to this Kentucky Derby contender?

The cleverly named Line of David (Lion Heart – Emma’s Dilemma, by Capote) has an interesting pedigree.  His sire Lion Heart was aptly named, for he was all heart while running second to Smarty Jones in the 2004 Kentucky Derby.  Lion Heart, a son of graded stakes placed sprinter Tale of the Cat, won the Haskell Invitational (G-1) at 1 1/8 miles over a weak field, but was at his strongest up to 1 1/16 miles. His progeny to date are precocious and win primarily between five furlongs and 1 1/16 miles.  Lion of David is his first graded stakes winner. Lion Heart has two crops of racing age and didn’t have adequate time to prove himself at stud in the U.S. before he was sent to Turkey this year.

Line of David’s damsire Capote was a brilliant Eclipse champion two year old in 1986. The son of Seattle Slew had distance limitations as did his offspring. Capote’s daughters have produced seven stakes winners at 1 1/8 miles and only one at 1 ¼ miles, which won a listed stakes race in Sweden.

From only two crops to race, Lion Heart has produced three foals from Capote mares. All three are winners and with Line of David, he now has a graded stakes winner.  This cross isn’t without precedent. The Tale of the Cat/Capote cross has produced fifteen starters, eleven winners and one graded stakes winner, Cat Moves, who took the Prioress Stakes (G-1) at six furlongs.

Line of David’s distaff family is full of class a few generations back.  His two half siblings only have two victories between them in over twenty attempts and his dam Emma’s Dilemma won once in eight tries, sprinting over dirt. She’s a half sister to Lil’s Boy, an Irish stakes winning miler. But Line of David’s third dam Lillian Russell is a half sister to the legendary Mr. Prospector.  Line of David has a RF (Rasmussen Factor inbreeding – inbred to a superior mare within five generations) to Gold Digger, through Lillian Russell and Mr. Prospector, who is Tale of the Cat’s damsire.

So what do these pedigree musings mean for Line of David and his chances to impact the Triple Crown races?  His front running style adds to the already speedy lineup of front runners or pace pressers that will be headed for a Calvary charge into the first turn of the Kentucky Derby. He was all out to hold off Super Saver and Dublin at 1 1/8 miles and was aided by the Oaklawn surface, where two of four runners had previously wired the field going Arkansas Derby distance.  With his miler’s speed and ability to win over dirt or turf, Line of David could become a proficient middle distance (7 furlongs – 1 1/16 miles) stakes horse.  Just keep him out of the way when the real running begins on May 1.