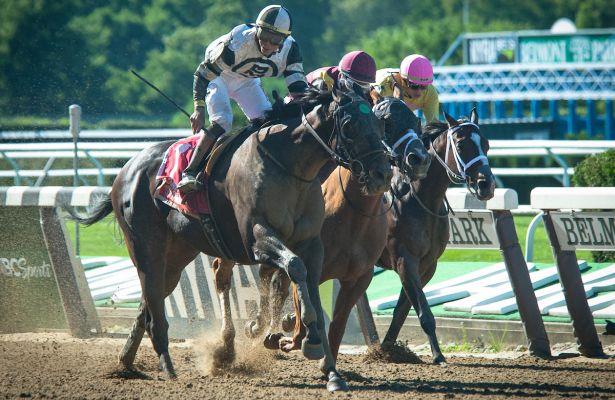 Limousine Liberal, already a multiple graded stakes winner, picked up his first stakes win outside Churchill Downs on Saturday by running down Whitmore to win the Grade 2, $350,000 Belmont Sprint Championship Stakes as part of the Stars and Stripes Festival.

Limousine Liberal comes from behind in a stretch duel to win the Belmont Sprint Championship! #WinandYoureIN pic.twitter.com/3Qe3RcGoMO

"I could see [jockey] Jose [Ortiz] had a ton of horse and I knew he was going to make his run,” said winning trainer Ben Colebrook. “I didn't want the wire to come too soon because he was coming with a big run. I'm just glad he proved he can win outside the state of Kentucky. I thought we were in the right place. I thought maybe we'd be ahead of Whitmore, maybe not so far back, but they went so fast. Jose knew where to have him.”

The 6-year-old Successful Appeal gelding, no worse than third throughout 2017 and 2018, opened up the season with a runner-up finish in Keeneland’s Grade 3 Commonwealth Stakes behind Warrior’s Club before turning the tables in the Grade 2 Churchill Downs Stakes to defend his title. Colebrook then sent Katherine Ball’s homebred out in the Grade 1 Runhappy Metropolitan Handicap.

In the Belmont Sprint, Shaft of Light took the lead early from Eye Luv Lulu and set opening fractions of :22.22 and :44.84. Whitmore sat in third ahead of Lewisfield while Ortiz took up second to last with Limousine Liberal over Favorable Outcome.

Turning for home, Eye Luv Lulu took the lead back from Shaft of Light, running three-quarters of a mile in 1:08.88. Ricardo Santana Jr. squeezed Whitmore up the rail, seeming to knock Shaft of Light out of contention. The wall of horses opened up and Ortiz asked Limousine Liberal to go. The pair ran down Whitmore to finish the seven furlongs on 1:21.53.

“He wasn't pulling me like he used to, so I thought they were going too fast,” Ortiz said of his ride. “They went 44 [seconds for the half mile] and it paid off in the end. I didn't expect Whitmore [No. 2] to be in front of me, so I decided to follow. I knew my horse was going to have something for the end. He decided to go the rail. I thought he was a little tired, so I went outside. But I'm glad I didn't have to check hard and I'm [happy] I was able to win the race.”

Eye Luv Lulu held for third over Lewisfield, Favorable Outcome and Shaft of Light. There was a steward’s inquiry regarding Whitmore for interference with Shaft of Light but no change was made.

Colebrook has campaigned Limousine Liberal to a record of 23:9-6-4, with earnings over $1.6 million.

“It's taken me so long to find the winner's circle in New York,” said Colebrook, “I'm just happy for this. We'd have to think about the [Aug. 25, Grade 1] Forego [at Saratoga] next but we were going to go to the Breeders' Cup even if we had to pay our own way in."