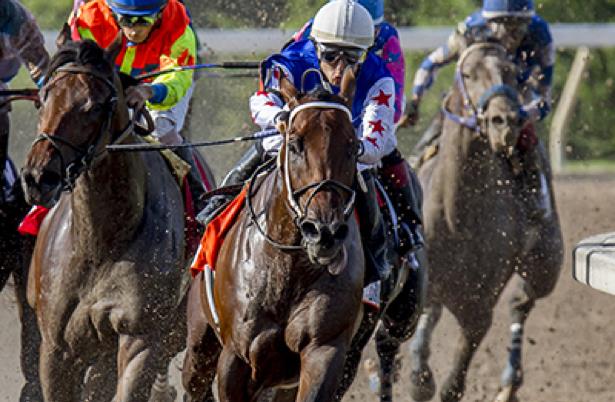 Off at 26-1 in the field of nine 3-year-olds, the son of Alternation trained by Steve Asmussen rebounded well from a ninth-place effort last out in the Ellis Park Derby.

"When he came down here, he just seemed to come alive and know what his job was," said Darren Fleming, assistant to Asmussen.

Limation sat off fractions of 24.29 and 48.13 set by early leader Charlie’s Schiller — a longshot who faded quickly in the turn — and moved with ease to the lead under jockey Diego Saenz. It was over from there with the final time 1:43.92 for 1 1/16 miles.

Saenz determined the early leader to be "cheap speed," riding his mount in the clear and as if he was the pace of the race. When it was time to go?

"It feels like when you press a pedal in your car and it's got gas, you know?" Saenz said.

This looked to be Lone Sailor’s ideal spot to finally score a breakthrough win 11 starts and nearly a calendar year since the Triple Crown series runner took his second career start at Saratoga. But when Charlie’s Schiller dropped back through the field, Lone Sailor ran into a wall of horses, swung outside and rallied to take second narrowly.

“He broke sharp and we had a very good trip,” said Lone Sailor's trainer, Tom Amoss. “My fear is that we would not get the pace set-up we needed. We just couldn’t catch the winner, who is a very good horse.”

The Super Derby, a Grade 1 race as recently as 2001, switched to turf in 2017 upon losing graded status but was back on the main track this year.

Limation improved his record to 3-0-3 in eight starts for owner Michael Langford. The $100,000 purchase returned $54.80 to his win backers Sunday.

Limation was the upset winner of the Grade 3 Super Derby.

His 1/2 sister will be up for auction in the @Keeneland Sales as hip 2276. pic.twitter.com/x0U6s1ZUMO