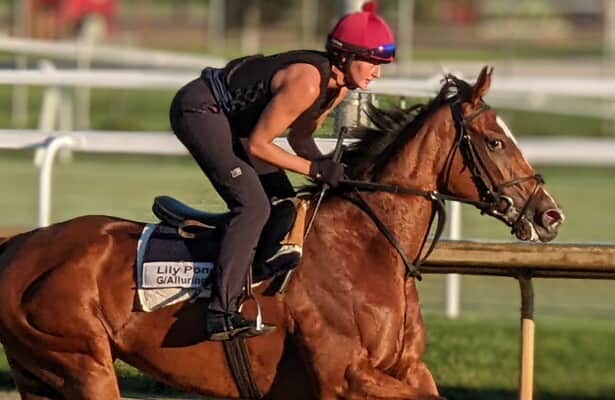 Amid the dozens of gallopers the past few mornings at Churchill Downs, a filly was conspicuous by her cantering presence. Passed by one horse after another, Lily Pond looked like she was in no hurry.

“She’s enjoying it,” her exercise rider Rachel Richardson said Thursday morning. “We built up to a mile.”

Six furlongs Tuesday. Seven Wednesday. Then eight Thursday as the 3-year-old filly who won a Group 2 race back home in Ireland last month tries to add a U.S. Grade 1 victory to her résumé Saturday, namely the $500,000 Beverly D. Stakes.

“We’ll do roughly about the same tomorrow,” said Pat Keating, best known as the traveling head lad working on behalf of trainer Aidan O’Brien. “It all depends on how things look, but we hope for the same tomorrow. We’ll just build her up slowly to Saturday and stay on the main track.”

Talk about one day at a time. One race at a time.

Lily Pond did not make her debut until April. Just five races later in her first Group/Grade 1 start, she is the 5-2 second choice in the Beverly D. The favorite at 2-1 is Rougir, a 4-year-old who won the 2021 Prix de l’Opéra (G1) in Paris before Peter Brant bought her for nearly $3.4 million and shipped her to trainer Chad Brown.

Bringing fresh talent to race at the top level on U.S. turf is nothing new for O’Brien in his work for Ireland racing giant Coolmore. For years it has been up to Keating to carry out that directive.

As an assistant trainer, Keating, 56, has been a frequent flyer to America. He was as much a fixture every summer at Arlington Park as the traditional champagne toasts after the big races on Million day.

Coolmore’s successes have included two winners in the Arlington Million (G1), four in the Secretariat (G1) and one in the Beverly D., a race for fillies and mares. That last breakthrough came with then 3-year-old Santa Barbara last summer, the final time the Million card was held at Arlington Park.

Now that the suburban Chicago racetrack is out of business, the Beverly D. has been moved south to Kentucky and cut from 1 3/16 to 1 1/8 miles. That was a distance that Lily Pond showed she could successfully handle July 17 when she won the Kilboy Estate (G2) at the Curragh.

In all five of her races, Lily Pond has pressed the pacesetters. On Saturday that may mean staying within striking distance of 5-year-old Princess Grace, a gate-to-wire winner last month in the 1 1/16-mile Dr. James Penny Memorial (G3) at Parx Racing. The pace, though, was hardly blistering. Princess Grace set fractions of 24.51, 49.08, 1:13.25 and 1:37.55 before crossing the finish line at 1:43.70.

That does not mean Hall of Famer John Velázquez, who won the Beverly D. twice riding Sistercharlie for Brown in 2018 and 2019, will take Lily Pond to an early lead.

“No, I wouldn’t think so,” Keating said. “I’m sure that Aidan and Johnny will make a plan. We’ll see what they want to do with her.”

The Coolmore homebred out of the Fastnet Rock broodmare Alluringly made her debut April 12 by winning a 1 5/16-mile maiden race on the synthetic track at Dundalk. Then in her turf debut on a rain-soaked course, Lily Pond finished a distant second as the 11-4 favorite in the 1 1/4-mile Blue Wind (G3) at Naas.

Two more Group 3 assignments followed, each against older fillies and mares. Lily Pond took third going 1 1/2 miles June 8 at Cork. Then on July 7 she weakened to finish a distant sixth in a 1 3/4-mile test at Leopardstown.

Undaunted, O’Brien brought her back only 10 days later and cut her back in distance for the Kilroy Estate victory that catapulted Lily Pond onto a flight to America.

Sired by the late, great stallion Galileo, she will break from the outside post and carry a career-low 120 pounds as the only 3-year-old in the Beverly D. field. Each of Lily Pond’s four older rivals was assigned 125 pounds.

Because of the tender condition of the slow-to-take-root turf course at Churchill Downs, workouts have been limited ahead of Saturday. That is when only the Beverly D. and Arlington Million will be run on the grass. Backside predictions about how the track will play have been both varied and uncertain.

Keating said, “I don’t know how the turf is.” Then he said he seldom concerned himself with the day-to-day condition of any such surface.

And they do it slowly. Not with gallops but with a canter every morning.

Asked if Lily Pond looked any different this week compared with how she trained ahead of her last two races, Richardson said no. Then she reiterated what she said at the start of a walk from the track back to the quarantine barn.

Whether Lily Pond’s human connections have the same feeling depends on what happens Saturday, when the weather is expected to be sunny with a high of 81 degrees. The Beverly D. is the fifth race on the card, and is scheduled to start at 3:01 p.m. EDT.