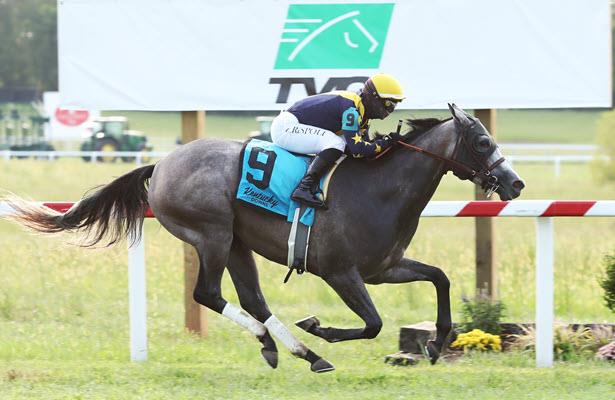 LNJ Foxwoods' Lighthouse showed them the way home in the $400,000 Music City Stakes for 3-year-old fillies at Kentucky Downs, becoming the first runner to win at the current meet after shipping in from California. The 1 1/2-length victory over Miss J McKay sent burgeoning superstar jockey Umberto Rispoli home with a winner out of only two mounts after spending most of a week in town.

But Rispoli came — and wanted to stay — for the Simon Callaghan-trained Lighthouse, who in her last race was second by only a neck against older fillies and mares.

“When they postponed the races, I could have traveled back for the meeting at Santa Anita,” said the Italian-born Rispoli, who rode in Hong Kong before relocating to Southern California, where he lost the Del Mar riding title on the last day by one win to his close friend Flavien Prat.

“I decided to stay. I knew she was going to have a chance," he said. "She probably could have won last time as well, but the distance was too short at Del Mar. So I knew she might handle the track. When Simon ships a horse, he’s always confident. This was good. It was a nice experience. The track is a funny track. But being around Europe, I’ve been riding many times on tracks like that so it doesn’t bother me at all. I waited three more days and I’m so happy to go back home with a winner. So that’s perfect.”

LIGHTHOUSE (@simon_callaghan) wins the Music City Stakes for @LNJFoxwoods under a top ride from @umbyrispoli to wrap up the day's racing at @KYDownsRacing.

Closing day of the RUNHAPPY meet at Kentucky Downs is tomorrow on @TVG. First post 1:15pm ET / 10:15am PT pic.twitter.com/lg6EYRK2sH

Evil Lyn and Bredenbury led through the first quarter-mile in a swift 21.87 seconds while Rispoli kept Lighthouse in striking distance, just 1 1/2 lengths off the pace.

With a half-mile booked in 45.27 seconds, Lighthouse was about to roll by Evil Lyn, and the eventual winner led by a quickly widening three lengths with a furlong remaining. Lighthouse easily held safe Miss J McKay, who was fourth by two lengths during the first four furlongs and gamely stayed on to finish 1 1/2 lengths behind the winner. The time for 6 1/2 furlongs was 1:14.99 over a course rated good.

“We were surprised because there wasn’t much speed in the race,” Rispoli said. “When I looked around and nobody wants to go, I say, ‘Well, I’ll take it.’ I knew she was good enough to win from the front. … I decided to run away, and she ran very good to the line. So I’m very pleased and happy with her.

“I’ve been riding around the world, and even in Italy we have a few up and down tracks. Not like this. But in England and France too. But I love the grass, so I can adapt myself anywhere, no matter what.”

Lighthouse, who previously had run six times exclusively at Santa Anita and Del Mar, has failed to hit the board only once in seven starts. With her victory at Kentucky Downs, she has three wins, two seconds and a third combined with earnings of $335,171 after today's payday of $233,120. Available money in the Music City was $360,385.

“She’s been incredibly consistent,” Callaghan said by phone. “I’ve been on a really progressive path, and I think her best race of her lifetime was against older fillies. I think that’s when she really showed she’s really improving. We felt it warranted the trip. We thought it’s good timing, it’s a big pot and makes sense. It was great that she got the win.

“She was in a good spot. But you’re always cognizant on that track that you don’t want to go too early. You just want to be patient. She was just loaded the whole way. Umberto hasn’t ridden much at this track but is a world-class rider. I said ‘Just don’t take anything away from her. But certainly don’t be too aggressive.’ She just placed herself there. He sat as as long as he could, and she was loaded and he went on and got the job done.”

Even-money favorite Kimari was another length-and-a-quarter back in third, and Outburst was fourth, an additional 2 3/4 lengths back.

Trainer Wesley Ward — who settled on the Music City after entering Kimari in three stakes this meet, including in Wednesday’s closing-day Grade 3 Franklin-Simpson against males, joked afterward, “Maybe I’ll run tomorrow, too.” More seriously he said, “She ran well.”

After the four best runners, rounding out the order of finish were Lucrezia and Bredenbury who dead-heated for fifth, She's My Type (FR), Evil Lyn, Enola Gay, She's So Special and Finite. Scratched were Hear My Prayer, Mom's Red Lipstick and also-eligibles Fashionable Lady, Poseidon's Passion and Lucky Jingle.

Bridgmohan guides Emro to 2-for-2 in $400K Untapable

Kueber Racing's Emro, who won her debut at Ellis Park, ran her record to 2-for-2 in taking the $400,000 Untapable Stakes for 2-year-old fillies in dominant fashion by 2 3/4 lengths over Taylor’s Tourist after a strong stretch run from off the pace under Shaun Bridgmohan.

“I was very proud of her,” said winning trainer Brad Cox. “She’s been training well, obviously. She got it done first time out, and we’ve been pointing for this since she broke her maiden. Very, very happy with the performance and Shaun did a good job.”

Augustin Stable's Theodora B. held off a late charge by favored Mrs. Sippy to win the $500,000 TVG Stakes for fillies and mares by three-quarters of length while never seriously threatened by the closing favorite Mrs. Sippy over a course rated good.

“She’s a really incredible filly, a little on the quirky side,” said Fenella O’Flynn, who serves as an assistant trainer, van driver and whatever needs done for Maryland-based trainer Michael Dickinson. “But she’s a really, really nice filly. She trained lovely here the last couple of days. We had to stay the extra couple of days of course, but it was better for her. We traveled here and we’ll travel again tomorrow to Tapeta Farm.”