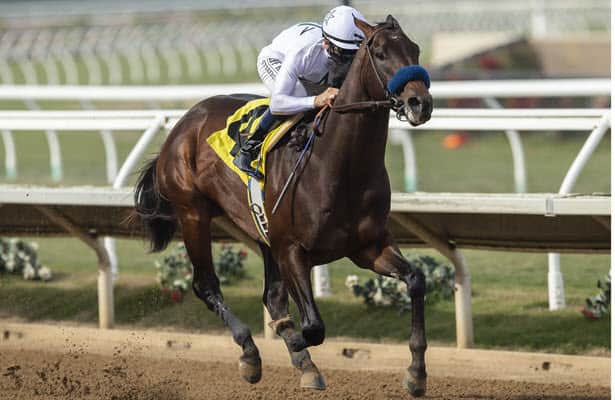 CHC Inc. and WinStar Farm’s dual graded-stakes winning sophomore Life Is Good will attempt to make his second start off a layoff a winning one when taking on older horses for the first time in Saturday’s Grade 2, $300,000 Kelso for 3-year-olds and upward going a one-turn mile at Belmont Park.

Life Is Good, trained by Hall of Famer Todd Pletcher, arrives at the Kelso off a sharp runner-up effort to Jackie’s Warrior in the Grade 1 H. Allen Jerkens Memorial on Aug. 28 at Saratoga Race Course. The son of leading sire Into Mischief posted swift fractions in the seven-furlong event before engaging in a dramatic stretch duel with Jackie’s Warrior, which saw Life Is Good miss by a neck.

Life Is Good entered the H. Allen Jerkens off a six-month layoff from wins at Santa Anita Park over eventual Grade 1 Kentucky Derby winner Medina Spirit in both the Grade 3 Sham on January 2 and the Grade 2 San Felipe on March 6 for Hall of Fame trainer Bob Baffert.

Life Is Good breezed a half-mile in 48.46 on the Belmont dirt training track on September 22.

?“He ran a giant race off the layoff and has trained well since then,” said Pletcher, whose previous Kelso coups came with Uncle Mo [2011], Graydar [2013] and Anchor Down [2016]. “He’s an enthusiastic horse to train. In both works he was well in hand, especially in his last breeze. He kind of fools you watching him. He doesn’t look like he’s going that fast, but then he gallops out in 1:25 and change.”

Pletcher credited his team as well as the crew at WinStar Farm for an excellent job preparing Life Is Good for his Saratoga return.

“Everyone did a great job bringing him back,” Pletcher said. “He did a lot of training at Keeneland and trained extremely well at Saratoga. He’s just a very talented horse so I was not surprised he had run so well off the bench. It was an ambitious goal to run in a Grade 1, but he’s a very talented horse and ran terrific. He came out of it well and has continued to train great.”

Pletcher said a solid effort from Life Is Good on Saturday would likely result in a trip to Del Mar for the Grade 1, $1 million Breeders’ Cup Dirt Mile on November 6.

“Right now we’re thinking about the Breeders’ Cup Dirt Mile. Obviously, we need to run here and assess how he does, but that’s what we’re thinking at the moment,” Pletcher said. “He certainly trains like a horse that’s capable of running further and hopefully that’s the case down the road.”

Bred in Kentucky by Gary and Mary West Stable, Life Is Good is out of the Distorted Humor mare Beach Walk.

Jockey Irad Ortiz, Jr., who piloted Vyjack to victory in the 2014 Kelso, will climb aboard Life Is Good for the first time from post 2.

Shooting Star Thoroughbreds’ Chance It arrives off a third-place finish to talented sprinters Yaupon and Firenze Fire in the seven-furlong Grade 1 Forego on August 28 at Saratoga.

The Saffie Joseph, Jr.-trained son of Currency Swap made his first start outside his native Florida in the Forego, where he rated a close third to the inside of the top two finishers, dropped to fifth around the far turn, but re-established position to complete the trifecta.

Chance It, who boasts a consistent 10-4-4-1 record, was a close second in his previous two starts this season and will be in pursuit of his first victory since capturing the Mucho Macho Man in January 2020 at Gulfstream Park.

Trin-Brook Stables’ Informative will attempt another graded stakes upset for trainer Uriah St. Lewis. The 4-year-old son of Bodemeister lit up the Monmouth Park tote board when capturing the Grade 3 Salvator Mile on June 12, where he went off at 79-1 odds.

Informative, who boasts two wins in five starts at the Kelso distance, will go back to one mile following unplaced efforts in the 10-furlong Grade 2 Suburban in July at Belmont Park and the nine-furlong Grade 2 Charles Town Classic on August 27.

Flying P Stable will look to add to their string of recent upset stakes wins on the NYRA circuit when sending out last-out winner Fort Peck for trainer Robertino Diodoro. Flying P Stable’s Locally Owned posted an 18-1 upset over the Diodoro-trained Lone Rock [co-owned by Flying P Stable] in Saturday’s Grand Prix American Jockey Club Invitational at Belmont and Fort Peck will look to continue the trend this weekend.

A 6-year-old son of Fort Larned, Fort Peck was triumphant in his debut for Diodoro when scoring for a $50,000 tag on August 7 at Saratoga.

Completing the field is Three Diamonds Farm’s Doubly Blessed, who will try to make amends following a distant seventh in the Forego. The son of Empire Maker will make his third start over Big Sandy following a close second to Locally Owned in an April optional claiming tilt at 1 1/16-miles, followed by a victory at the same distance in May.

The Kelso is slated as Race 4 on Saturday’s 11-race card, which also features the Grade 3, $200,000 Athenia for fillies and mares going nine furlongs over the inner turf in Race 10. First post is 1 p.m. EDT.

The Kelso honors the legendary five-time Horse of the Year [1960-64] who triumphed in the Jockey Club Gold Cup in each of those years. Campaigned by Allaire du Pont’s Bohemia Stable and trained by Carl Hanford, Kelso’s illustrious career saw the gifted dark bay defeat more champion horses than any other thoroughbred, including Jaipur, Carry Back, Roman Brother and Bald Eagle. Kelso, who was ranked No. 4 on the Top 100 Greatest North American Thoroughbreds of the 20th Century, was inducted into the Hall of Fame in 1967.
Life Is Good Kelso Handicap Kelso Handicap (2021)