Life Is Good runs away with Derby prep at Santa Anita 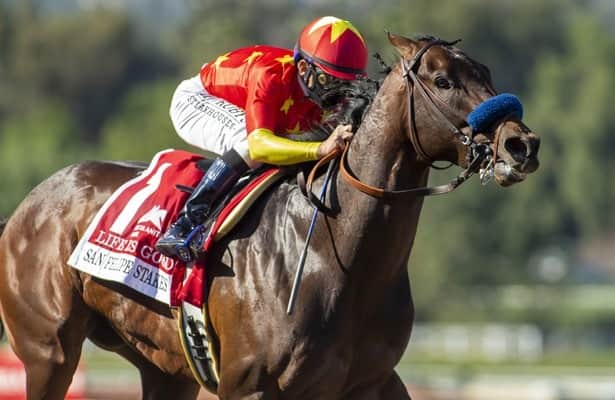 It was Life Is Good’s chance to grab the favorite’s role for the Kentucky Derby. Saturday he seized it.

Bob Baffert’s top hope to bring him his seventh Derby victory was an easy winner Saturday at Santa Anita. With Mike Smith riding, Life Is Good (1-2) led from gate to wire and ran away to an eight-length victory in the San Felipe Stakes (G2), a virtual win-and-you’re-in qualifier for the Derby.

“I was hoping for something like this,” Baffert said after Life Is Good ran his record to 3-for-3. “He’s shown us from Day 1 that he’s just an exceptional horse. My job is just to keep him healthy and just guide him along. That’s all I can do.”

Stablemate Medina Spirit (3-1) was eight lengths behind in second with Dream Shake (8-1) finishing third and Roman Centurian (10-1) fourth. The winning time for the 1 1/16-mile race was 1:42.18 on a sun-drenched afternoon with a restricted but noticeable crowd of owners who were abuzz.

The lopsided result led Circa Sports to cut Life Is Good’s odds to 4-1, making him the Las Vegas sportsbook’s new futures favorite to win the Derby. By Saturday at 6:30 p.m. EST, about 40 minutes after the race, Life Is Good was also the 4-1 favorite in the ongoing pari-mutuel Kentucky Derby Future Wager, which closes Sunday evening.

Life Is Good set pacesetting fractions of 23.63, 46.83 and 1:10.55, fast enough to have Smith wondering if that was too quick to have enough left late in the Into Mischief colt’s longest race yet.

“I’m better at trying to finesse one to rate rather than pull on one,” Smith said. “I just put my hands down, and I certainly applied pressure. Not a whole lot. I just wanted him to get happy and comfortable.”

It must have worked.

Life Is Good extended his lead from three lengths going into the second turn to six lengths at the top of the stretch. He had gone the first mile in 1:35.46 as he drifted out in the final furlong while still extending his lead.

“He never does that in the mornings,” Baffert said. “(Smith) was telling me that he saw that screen.”

Baffert was referring to the big video board on the infield about 50 yards before the finish.

“In the mornings he goes by that screen like it’s nothing,” Smith said. “But it’s not on. We might want to get them to turn it on a couple mornings.”

The 50 points earned for winning this race brought Life Is Good to 60 in Kentucky Derby qualifying, which should be more than enough to get him into the gate at Churchill Downs. In between, though, will be a date April 3 in the 1 1/8-mile Santa Anita Derby (G1). Then it will be the 1 1/4 miles May 1 in Kentucky.

Smith has no worries that Life Is Good will be able to conquer the ever-lengthening races.

“The mile-and-a-sixteenth is a good tell-all, isn’t it?” Smith said. “If they get that they’ll certainly get the mile-and-a-eighth. If I can get a 3-year-old to get the mile-and-an-eighth, I leave it up to Bob. Bob’s the man. He can get them that other quarter-mile or eighth of a mile that they need. He always does.”

Life is Good is owned by WinStar Farm and China Horse Club. He was a $525,000 auction purchase as a yearling.